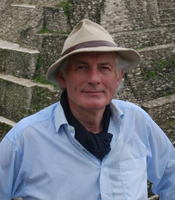 Dan Cruickshank is an art historian and television presenter on the BBC, best known for his popular series Britain’s Best Buildings, Around the World in 80 Treasures and What the Industrial Revolution Did For Us. His series, Adventures in Architecture, for which he wrote the accompanying book, was broadcast on BBC2 in 2008. He has also presented numerous single documentaries, including The Art of Dying, and Britain’s Park Story.

Dan Cruickshank started his career with the BBC as consultant, writer and presenter on the architectural programmes One Foot in the Past and The House Detectives. He also contributed films to the Timewatch and Omnibus strands. He has travelled extensively, filming in troubled regions including Afghanistan in 2002 (for the BBC Omnibus series to discover what cultural treasures remained after years of civil war and bloodshed) and Iraq (for Under Fire, reporting on the scale of looting of Iraqi treasures).

Clients often ask about purchasing books for giveaways and delegate packs. Below you’ll find a selection of products by Dan Cruickshank. Click the images to view on Amazon's website. For bulk orders, please speak with your Booking Agent.

How to book Dan Cruickshank for your event