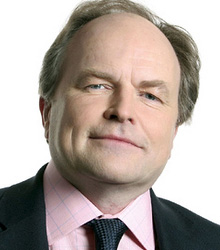 Clive Anderson is a barrister by training, but he is best known for being an award-winning and versatile, broadcaster and comedy writer.

He received his taste for comedy and performing when he studied at Selwyn College, Cambridge between 1972-5. He was president of the Cambridge Footlights for a year and wrote and performed in several revues including 'Stage Fright' which he directed.

Winner of the television industry's British Comedy Award in 1991, Clive began his success during his 15-year law career with stand-up comedy and script writing, before rising to fame in 1988 as the host of Whose Line Is It Anyway? on radio and then television.

In 1989, Clive Anderson went on to front ten series of his own show, Clive Anderson Talks Back on Channel 4 and four series of Clive Anderson All Talk on BBC 1. As well as presenting several other TV and radio programmes, he has made many guest appearances on shows such as Have I Got News For You, QI, Mock the Week, and The Bubble. Clive has been the unflappable host of live events and award ceremonies for BAFTA, the London Evening Standard Film Awards, the Chortle Awards and the Olivier Awards and has fronted other events and programmes ranging from the Proms to politics.

In recent years on television he has presented The Big Read and Maestro! on BBC 2. Clive has also presented a two-part series investigating China's Football Revolution, as well as being a regular contributor to The Footballs On on BT Sport.

Clive hosted Whose Line Is It Anyway?…Live the official worldwide première at the Adelphi Theatre in London in 2015 and due to popular demand the sold-out show returned to London Palladium for a limited run in 2016.

He currently presents Loose Ends and Unreliable Evidence (both BBC Radio 4). He has hosted many award ceremonies and written for a variety of comedians, radio and TV programmes, and for several national newspapers and magazines.

Clive Anderson provided an outstanding service - we were extremely happy with his delivery on the night.

How to book Clive Anderson for your event