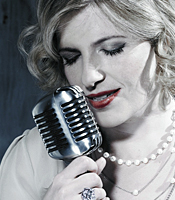 She brings new character to old favourites including Laura Nyro's "Stoned Soul Picnic", Dusty Springfield's "What Are You Doing The Rest of Your Life?" and the standards "Mellow Tone", "The Music Goes Round And Round" and 'Mood Indigo".

Following the release in 2002 of her second album 'Orsino's Songs', on the jazz specialist label Candid, Michael Parkinson predicted that Clare would be the "next big thing". He has continued to be a staunch supporter inviting her to sing on his TV show in November 2003 and to join him on his Radio 2 show. Having heard 'Don't Talk' he declared it "worth raving about".

Clare Teal's personality takes her to an even more stellar level as a live performer when her passion, wit and ability to truly entertain set her apart. She has played at jazz clubs and festivals the length and breadth of the country and wowed thousands when she played the OneWorld stage at Glastonbury, received rave reviews after 4 nights at Edinburgh Festival and was invited to sing with John Dankworth and Cleo Laine for Radio 2's 'Live From The Stables'.

Clare's well-documented 'discovery' of Jamie Cullum - she recommended him to Candid Records after hearing an early demo recording at a dinner party. Clare also recorded with Jamie; their duet 'The Road Less Travelled' appears on her third album for Candid, of the same name.

Clare Teal was nominated in the 'Rising Star' category in 2003's BBC Jazz Awards and in the 'Best Vocalist' category in both 2003 and 2004. Already a major star in her home county of Yorkshire, Clare Teal went on to be nominated for Arts & Entertainment Personality Of The Year at the Yorkshire TV Awards (The Yorkies).

How to book Clare Teal for your event