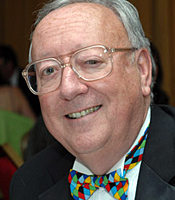 Book Bob 'The Cat' Bevan MBE
add to shortlist
About

Bob 'The Cat' Bevan is one of the UK's greatest raconteurs and possibly the first person ever to be honoured by HM The Queen for after-dinner speaking.

While his nickname - The Cat - indicates his goal keeping background - Bob Bevan is a leading corporate comedian tailoring his act to the characters in the audience.

Prior to joining the after dinner speaking 'circuit', Bob Bevan had a highly successful business career in journalism and public relations. He is still a Member of the Institute of Public Relations and the National Union of Journalists. He was a reporter on Lloyd's List, the daily shipping newspaper, and deputy editor of a travel trade magazine. He was Group Director of Public Relations for European Ferries for 14 years and has twice run his own PR consultancy with some success.

Bob 'The Cat' Bevan made his first speech at his old boys dinner in 1967 and turned professional in 1980. Sport is Bob’s great love. He played football for West Wickham in the Southern Amateur League and Old Wilsonians in the Southern Olympian League for 25 years and still plays in veteran games. Before going in goal he was an inside forward and once scored six goals in an 8-2 win against Unilever.

He achieved a lifelong ambition by playing at Wembley for Old Burnley against Old Wolves in front of 80,000 prior to a Cup Final. He plays cricket for the Lord's Taverners and his village side and has played 1st XI North Kent League cricket. Playing for a Kent XI in 1991 he took 7 for 49 against Hextable and 11 for 69 in a two innings match the following year against the same opponents. He has also played Kent League tennis

He has made countless TV and radio appearances. He followed Danny Baker as presenter of BBC Radio 5's Six-O-Six Show and appeared as a stand-up comic in the BBC 1 Variety Show - Jim Davidson Presents and Aunty's Bloomers with Terry Wogan for the fourth time.

He has also appeared with several members of the Royal Family and alongside the late Archbishop of Canterbury, Lord Runcie, one of the many public figures for whom he has written.

Bob Bevan was awarded the MBE in 2004, Apart from his act Bob is also an excellent Master of Ceremonies and, with his journalism and public relations background, makes an excellent facilitator.

Bob ‘The Cat’ Bevan is one of the most versatile and popular entertainers on the after dinner and conference circuits. Starting with tales about his hopelessness as a goalkeeper he has developed into an all-round comedian, presenter, interviewer and auctioneer suitable for any audience.

Without a doubt Bob 'the Cat' is the funniest speaker I have heard on football in all my experience.

One of Britain's funniest after dinner comedians.

What was especially pleasing was your capacity to be exceedingly funny without the need to descend to obscenity - a truly outstanding performance.

Clients often ask about purchasing books for giveaways and delegate packs. Below you’ll find a selection of products by Bob 'The Cat' Bevan MBE. Click the images to view on Amazon's website. For bulk orders, please speak with your Booking Agent.

How to book Bob 'The Cat' Bevan MBE for your event