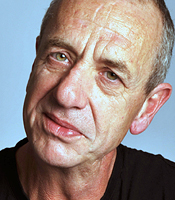 Arthur Smith is a comedian, compare, playwright, panellist, performer of international stature and all-round British institution. He was one of the ‘alternative comedians' who shook up the world of light entertainment in the eighties and nineties.

A BBC regular, well known for his appearances on TV's Grumpy Old Men, of which he did three series, QI, Have I Got News For You, The One Show and Radio 4's Loose Ends, Balham Bash and Radio 2's Smith Lectures, Arthur Smith is simply one of our funniest and most original comic performers and is guaranteed to bring your event hilarity, mirth and scandal.

He is also an accomplished playwright, his plays include An Evening With Gary Lineker which was nominated for an Olivier Award and made into a TV film, My Summer With Des and The Live Bed Show which had a run in the West End, starring Caroline Quentin and Paul Merton.

He is a ‘Spirit of The Fringe' award-winning stalwart of the Edinburgh Fringe Festival with many of his productions transferring to London's West End and in 2005 Arthur turned down a Perrier Award for Lifetime Achievement stating 'They wanted to tell me I was old and cool; well, I know that already and anyway, my ego is bloated enough'. In 2010, he was a Malcolm Hardee Cunning Stunt Award nominee for best publicity stunt at the Edinburgh Fringe after declaring that he would pay £100 to any journalist attending his show who would juggle fish.

He remains a regular guest on Loose Ends and Pick Of The Week. As a comedian he has played all over the country, including the Comedy Store, Jongleurs, assorted West End theatres and BBC1's The One Show plus weekly appearances on radio with Comedy Club On Radio 4.

Clients often ask about purchasing books for giveaways and delegate packs. Below you’ll find a selection of products by Arthur Smith. Click the images to view on Amazon's website. For bulk orders, please speak with your Booking Agent.

How to book Arthur Smith for your event