Book All Saints add to shortlist 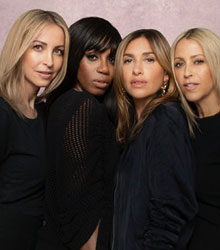 Book All Saints
add to shortlist
About

All Saints became one of the most successful pop groups of the 1990s, with two multi-platinum albums and record sales in excess of 12 million worldwide. Their debut album, ‘All Saints’ went 5x platinum and produced 3 number-one singles, including the double BRIT award-winning ‘Never Ever’ which ended up selling over 1.2 million copies in the UK. The album also spawned the No 1 singles ‘Under the Bridge/Lady Marmalade’ & ‘Bootie Call’.

The second album, ‘Saints & Sinners ‘ (2000), also yielded two number 1’s, the Ivor Novello award winning ‘Pure Shores’, written by Shaznay Lewis and William Orbit for the soundtrack of the film The Beach (starring Leonardo DiCaprio) and ‘Black Coffee’. In 2006, the band scored yet another top three hit with the Greg Kurstin collaboration 'Rocksteady' from their third album "Studio 1'.

In between band projects, Nicole and Natalie Appleton released the succesful album 'Everything's Eventual' as Appleton which included the top 5 singles 'Fantasy' and 'Don't Worry'. Mel Blatt released a top ten collaboration with Artful Dodger and serves as a judge on New Zealand's X Factor. Shaznay Lewis released a solo album 'Open' (which featured the top ten single 'Never Felt Like This Before')and has forged a career as an Ivor Novello-winning songwriter, having written songs for Little Mix, Westlife and Stooshe (including the Brit award nominated 'Black Heart') amongst many others.

In 2016 the band released their first new album in 10 years after two years of work in the studio. Preceded by the first single 'One Strike', ‘Red Flag’ is a reflection on how far the band have come both personally and musically, with intensely honest lyrics, lush production and the girls' unmistakable harmonies.

How to book All Saints for your event

Tags for All Saints