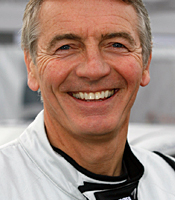 As a small boy Tony Jardine's love of cars soon turned him into a lover of competition cars once he realised they raced them too! So passionate was he, that walls and fences proved no obstacle getting into Aintree to see heroes Stirling Moss and Jack Brabham.

Beginning his career as a teacher in the USA, UK and Middle East, Tony was Head of Art at the New English School in Kuwait, where he rallied for Datsun importers in his spare time - finishing eighth on the Kuwait International Rally 1975. He made his transition into F1 working for Goodyear's Grand Prix Team, driving trucks and fitting tyres at Grand Prix events before becoming a temporary engineer to teams in the pit lane. From his tyre team mates he earned the nick name 'Teach', still used by Bernie Ecclestone to this day.

It was not long before Tony joined the Brabham Formula One Team as race co-ordinator for all races and tests, before moving into the drawing office. Tony then moved to Marlboro McLaren as Assistant Team Manager where he worked closely with Alain Prost and John Watson.

Determined to learn about marketing Jardine left F1 to work for an American promotions company in the FMCG arena. Just 16 months later he was head hunted back into racing but this time on the other side of the garage as PR man overseeing the JPS brand in F1 with Lotus, working with Peter Warr, Nigel Mansell, Elio de Angelis and Ayrton Senna.

With his immersion in motorsport and depth of knowledge, Tony Jardine formed his own successful sports PR company in 1985. Early on, the company established a credible reputation, having spent three years working on promotional campaigns with Sir Richard Branson on record-breaking challenges across the Atlantic by sea and by air, and even job campaigns with the Government.

Rallying has always been a passion for Tony, having competed in four Arctic Rally's and ten successive Network Q Rally GB's, finishing second in class in 2001 and winning the journalists award three times. In recent years he has combined racing with rallying. He has raced Legends, Ginettas and a huge Chevrolet 155 in classic saloons with team owner Leon Cole. Tony has also tested Mika Salo's 1997 Tyrrell at Donington Park. He has driven works rally cars for Proton, Honda and MG, collecting numerable awards along the way including first in class on the tortuous Jim Clark Rally in Scotland.

Tony Jardine has more than thirty years experience in GP Racing, ranging from truck driver, mechanic, technician and subsequently in management, PR and media roles in the sport. Very few in F1 possess Tony's 'all round' experience after his long-term involvement with the sport.

How to book Tony Jardine for your event