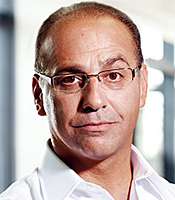 Theo Paphitis came to Britain from Limassol, Cyprus in 1966, aged six, and was running the tuck shop at his north London school by the time he was 15. His business empire now spans retail, property, finance and consumer goods.

Having left school at the age of 16 with no qualifications due to his dyslexia, he began working in a Lloyds of London brokerage as a filing clerk. Or as Theo remembers it, the 'Tea Stirrer's Assistant'.

However, having realised very quickly that filing was not his forte, he left and took up a job working for Watches of Switzerland where he discovered his passion for retail. After several years the opportunity arose for Theo, by now aged 20, to return to insurance, in a more customer facing role, where he gained invaluable experience in finance and property.

He discovered his natural ability of pointing out the obvious and applying common sense (which is not common at all). In no time he was helping businesses in difficulty and this soon became a full time role. By the time he had reached 23 he set up his first business, Surrey & Kent Associates, a property finance broker.

Theo has a natural gift for turning losers into winners. In 1990 he bought Movie Media Sports, a media agency, from the receiver. Then in 1995, he bought the Ryman stationery chain from the receivers for £5m, and in 1997 he bought Millwall Football Club from Administration in a £10m deal. 1999 saw Theo acquire a 60% stake in La Senza, the lingerie business, for just £1 and in 2006, just a few years later, he sold his equity stake for a reported £100 million.

In 2005, Theo Paphitis replaced Simon Woodroffe in the second series of the popular BBC2 business reality show Dragons’ Den and spent eight subsequent years as a stalwart of the show coining such favourite phrases with viewers as ‘I’d rather stick pins in my eyes than invest in that!”.

Throughout the seasons Theo invested in numerous small businesses and helped fledgling entrepreneurs develop their businesses in a wide variety of industries from consumer goods to online antique valuations. He left the TV show in 2012 to focus on his expanding retail empire. Theo also returned for a few episodes in Series 17 of Dragons' Den, aired in September 2019 and also Series 18 in 2021.

Since joining Dragons’ Den, Theo Paphitis has revived the fortunes of notable high street names such as Stationery Box, Contessa Lingerie and more recently the home and garden retailer Robert Dyas. He also bought experience days company Red Letter Days out of administration in 2005, with fellow Dragon Peter Jones, turning it around and selling in 2017.

In the Spring of 2011 Theo also launched what has now become the multi award winning, global lingerie brand Boux Avenue. And in 2015 he launched Theo Paphitis Retail Group which encompasses Ryman Stationery, Robert Dyas, Boux Avenue and London Graphic Centre, which he acquired in 2016. The combined group comprises over 300 stores and 4,000 employees who serve millions of customers a year.

Theo Paphitis attributes his business success to his natural common sense, and his favourite motto, which is a famous business school motto: "KISS: Keep It Simple, Stupid"

Clients often ask about purchasing books for giveaways and delegate packs. Below you’ll find a selection of products by Theo Paphitis. Click the images to view on Amazon's website. For bulk orders, please speak with your Booking Agent.

How to book Theo Paphitis for your event