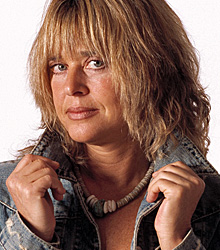 Suzi Quatro began her musical career at the age of fourteen, playing the bass guitar in all-female bands The Pleasure Seekers and Cradle with her sisters Patti, Nancy, and Arlene. Born in Detroit, Michigan, Suzi moved to England in 1971 after being discovered by the record producer Mickie Most, responsible for The Animals, Jeff Beck, Lulu, and Donovan.

In 1985, Suzi Quatro collaborated with Bronski Beat and members of The Kinks, Eddie and the Hot Rods, and Dr. Feelgood on the Mark Cunningham produced version of David Bowie's "Heroes", released the following year as the 1986 BBC Children In Need single. The next year (1987) she was part of the Ferry Aid charity single ""Let It Be", which returned her to the UK charts at number 1.

In December 2005, a documentary chronicling Suzi's life, Naked Under Leather named after a 1975 bootleg album, directed by former member of The Runaways, Victory Tischler Blue, appeared. In February 2006, she released Back to the Drive, produced by Sweet guitarist Andy Scott. The album's title track was written by her former collaborator Mike Chapman. In March 2007, Suzi Quatro released a version of the Eagles song "Desperado", followed by the publication of her autobiography, Unzipped.

In June 2010, she headlined the 'Girls night out' at the Isle of Wight Festival. That same month, Quatro was voted into the Michigan Rock and Roll Legends online Hall of Fame, and in August 2011, she released her fifteenth studio album, In the Spotlight (and its single "Spotlight") in Australia. This album was a mixture of new songs written by her original producer Mike Chapman (or herself) and covers.[

In September 2011, the BBC stated on their website that Quatro had sold 'over 50 million records' and continues to perform live, 'doing over 100 shows worldwide a year'.

In addition to touring, Suzi has also forged a highly successful acting career on television including Happy Days, Minder, Dempsey and Makepeace, Midsomer Murders, etc..), and on stage with Annie Get Your Gun. In 1994, she made a cameo appearance in an episode of the BBC comedy Absolutely Fabulous.

Suzi Quatro is a popular headline act for corporate and private events worldwide.

Clients often ask about purchasing books for giveaways and delegate packs. Below you’ll find a selection of products by Suzi Quatro. Click the images to view on Amazon's website. For bulk orders, please speak with your Booking Agent.

How to book Suzi Quatro for your event