Former Formula One development and test driver for Williams 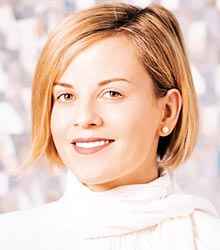 Susie virtually inherited her passion for motorsport. Even as a child she accompanied her parents, who have a motorcycle shop, to different racetracks and did her very first laps in a fun kart. From the early age of 8 she started to race karts at club level.

Only a little later she successfully participated in karting championships in Scotland and England. Aged 14 she snagged the top positions at both European and international levels. Attending a Formula 3 race in 1996 at Donington Park Circuit and experiencing Jenson Button's victory, she decided to follow her dream of becoming a racing driver – all the way up to Formula 1.

After seven years with Mercedes-Benz in DTM she reached her goal and since April 2012 she is the official development driver for the Williams F1 Team. She is only one of a handful of women who made it all the way up to F1.

In 2006 Susie had her debut in DTM and finished her first race within the top 10. As a firmly established racing driver she was part of one of the most popular touring car championships in the world. 2010 then became her most successful season within DTM and made points as first woman in DTM after almost 20 years. She ended her fifth season ahead of her brand colleagues Ralf Schumacher and David Coulthard.

After 73 races and 7 seasons with Mercedes-Benz Susie decided to look for new challenges and focus on her goal of driving a F1 car.

In 2012 she was appointed development driver for the Williams F1 Team. She made her Formula One debut putting the FW33 through its paces.

In July 2013 Susie made her first appearance in a full test, and became the first female to take part in a timed F1 session since 1992. Susie Wolff impressed as she finished just over two seconds behind the World Champion in the timesheets.

At the Grand Prix of Germany in Hockenheim, Susie impressed both, her fans and her critics, with a great 15th place in the first Free Practice Session on July 18th, only 0.2 seconds after her team-mate Felipe Massa. This success finally turned Susie Wolff into one of a handful of women who made it to the Formula 1.

After retiring from competitive driving at the end of 2015, Susie made a personal commitment to increase the intake of women in motorsport across all areas, this lead to the launch of Susie’s highly successful ‘Dare to be Different’ initiative in 2016.

In 2017 was awarded an MBE (Member of the British Empire) in Queen Elizabeth II’s New Years Honours, for her services and contribution to women in sport.

On June 26 2018, Susie was appointed Team Principal and a shareholder of VENTURI Formula E Team. Susie’s appointment as Team Principal, represents the next exciting step in a wide ranging motorsport career with her first formal move into team management and ownership.

Susie is a fantastic role model for women making headway in professions dominated by men. Bilingual in English and German, she is a firm favourite with sponsors and an accomplished public speaker.

Companies such as Randstad, UBS, Deutsche Post and Mercedes-Benz AMG book her regularly as a high valued speaker for their events.

Susie has enjoyed public speaking since childhood, entering public speaking competitions during her High School years and now enjoys speaking at events covering a number of topics for example:

My Story – Motorsport is not just a man's world. From starting as an 8 year old in karts to achieving my dream of driving in Formula 1.

Diversity – we are not defined by our gender but by our passion and character.

Motivational/inspirational – dream big and always set goals. We all have a gut feeling inside leading us towards happiness and fulfillment.

I've had the privilege of working with Susie Wolff for an executive event that our company has organised. In that time I have known Susie to be personable, enthusiastic and a brilliant business woman and driver. Susie has built a strong reputation as someone with vision, diligence and technical knowledge and I am thrilled I had the chance to experience seeing Susie implement these skills outside the race track. I found her speech at our conference to be incredibly valuable and educational, and so did the diverse group of automotive executives visiting our event. I strongly recommend Susie to anyone looking for a motivational or business speaker.

For our event at the Grand Prix of Austria 2015, we were very happy that Susie Wolff was willing to give our guests an insight into the fascinating world of F1. As a technology group with strong focus on the field of mobility, we primarily wanted to discuss the technical feats, and the perfect interaction of the entire team – which is the only way to be successful on the race track. Susie Wolff's experience as a racing driver and also as a test driver who is working very closely with the engineers on the continuous development – and presents this very charmingly – were a great benefit for the evening.

Susie's beliefs align closely with Willis's own values· - that risk management is essential to achieving performance excellence and that the best risk management is founded on great analytics. At the 2015 AIRMIC forum in Liverpool, Susie provided insight into her career to date, including her experiences of succeeding in a male dominated environment, at the Airmic Women in Business Networking Lunch, co· hosted by Willis and Rushton International. She also presented an after-dinner speech at the Willis Networking Dinner. On both occasions and during the whole conference Susie captivated delegates with her truly unique perspectives and fascinating motorsport insights, showing us all just what it takes to compete at the highest level of international Formula 1 racing.

How to book Susie Wolff MBE for your event