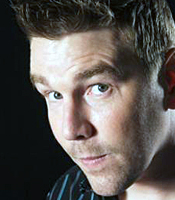 Chortle Award nominee and BBC New Comedy Award Finalist, Steve Williams is one of the most exciting and electrifying live performers of the new comedy generation.

Steve never fails to surprise and engage audiences with his hybrid of bizarre stories, larger than life physicality, spontaneous improvisation and his off-the-wall take on everyday life. His three solo shows at the Edinburgh Fringe have garnered considerable critical success.

It's not often I laugh so hard that I snort like a pig. But I did in Steve William's show... if you are any sort of comedy fan, you should see this show... There are some one-liners and asides that I am still quoting three days later.

His affable manner and skill at ad-libbing encourages audience contributions and Williams generously indulges them, his arcane knowledge and impressive capacity for regional accents creating an inclusive environment where everyone feels in on the joke... Yet alongside these more surreal episodes, he delivers acutely resonating moments of everyday observation. A likeable jack of so many comedy trades, Steve Williams is emerging as a master of them all.

How to book Steve Williams for your event