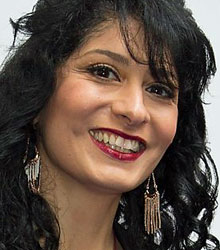 Comedian, speaker, advocate for human rights and the daughter of an exiled writer and comic from Iran, Shappi Khorsandi's upbringing has been anything but conventional.

Her family was forced to flee Iran for London after the Islamic Revolution following the publication of a satirical poem perceived as being critical of the revolutionary regime by her father, Hadi Khorsandi; he was attacked as being an "enemy of Islam". Subsequently Shappi was raised without any religion.

It also lead to the publication of her childhood memoirs, “A Beginner’s Guide To Acting English“, her best-selling literary debut, described by the Scotsman as ‘filled with laughter, wonder and compassion’. Emma Thompson said “This very funny, acute book also made me cry”.

Shappi went on to publish her first novel, Nina Is Not Ok, which was described by the Telegraph as ‘moving, funny and shocking’ and received tremendous acclaim from critics and readers alike.

In 2007, Shappi won Best Breakthrough Act at the Chortle Awards. That same year, she took her show 'Carry on Shappi' to the Edinburgh Fringe when she was 8 months pregnant, enticing at least one critic to plead "go and see her before her waters break!"

She was back in early 2008, taking 'Carry on Shappi' to the Soho Theatre in London. Shappi's 2006 show, 'Asylum Speaker' was an Edinburgh sell-out, followed by an extended run at The Soho Theatre. She has gigged internationally in the United States, the Middle East, Singapore, Australia and Amsterdam.

Shappi’s career has taken her to all corners of the globe. She has appeared on countless TV & Radio shows, including: Live at the Apollo, Michael McIntyre’s Comedy Roadshow, I’m a Celebrity: Get Me Out of Here, Mock The Week, 8 Out Of 10 Cats, MasterChef, Have I Got News For You, QI, Pointless Celebrities, Question Time and Just a Minute, as well as her own show, Shappi Talk.

She is a sought after cultural commentator appearing on ITV's Sunday Edition, BBC Radio 4's Woman's Hour, Radio 5 Live, BBC World Service & LBC and also in The Guardian, The Independent, Metro and on BBC News website. She was also a panellist on BBC's Question Time. Shappi has presented a series for Open University and is a regular roving reporter for BBC South's Inside Out.

Comedy is a family business for the Khorsandi's. In Los Angeles, Shappi performed in a seven week sell-out run with her brother in a show called 'How to be Iranian' as well as starring in her own one hour show. Other work in America included a month-long tour supporting her father in his extremely popular stand-up show.

As a keynote speaker and awards host, Shappi Khorsandi can deftly handle the most serious subjects with a sprinkling of humour – a skill perfected in her early stand-up shows.

Drawing on her past experiences as a female comic breaking into a male-dominated industry, Shappi is a popular speaker on topics surrounding diversity and inclusion and mental health. Her charmingly candid style combined with her sharp-as-a-tack delivery ensure that whether speaking virtually or in-person, she never fails to connect with an audience.

It’s The Way You Tell It: What Does Our Humour Say About Us?
Shappi explains how, despite what some may think, comedy is not just about telling jokes. It is about taking a risk and displaying a confidence which can help you in every area of your life, and build trust with those around you.

Humour is a powerful way to show other people the world as you see it and build rapport with those who, on paper, you may not seem to have anything in common. Of course, it can also massively misfire and do the opposite, so Shappi will outline the pitfalls and how to avoid them, too.

Defining Diversity and Embracing Cultural Difference
The drive for diversity can sometimes make people in workplaces panic and scramble around to grab the nearest brown person and plonk them in a group photo. Very often, Shappi Khorsandi has been that brown person.

But diversity is not about tokenistic representation, and the conversation surrounding it needs to be had much earlier and at every level of an organisation. Rather than just paying lip service to diversity, we need to discuss what it really means, why it is so important and how we can truly embrace the concept to produce beneficial and equitable outcomes for all.

Mental Health and Wellbeing
In a deeply personal and illuminating talk, Shappi Khorsandi takes the audience on a captivating journey from the 90s to the present day, revealing her own struggles with bulimia and anxiety disorders, and the tools and techniques she developed to cope with and overcome these issues.

With candour, warmth and humour, she will explain how we could all improve our lives dramatically if we paid a little bit more attention to maintaining our mental wellbeing.

A Woman in a Man’s World: Uncovering Everyday Sexism
As one of just a handful of women in the 1990s trying to break into a stand-up comedy industry dominated by bombastic men, Shappi Khorsandi knows all too well what it feels like to be a woman in a man’s world.

For every woman, in any sector, it can be a quiet, personal terrain to navigate. Sexism can be the hardest ‘ism’ to call out and challenge, because it can come from your closest quarters, and exist within your own family and friendship circle.

In this honest and very personal talk, Shappi will examine the ways in which women and men can work together to remove the barriers constructed by past prejudice, and shine a hopeful light on changing the status quo.

From mental illness to opium dens, it's all gone on in the Khorsandi household and in her on stage stand up shows Shappi recounts it all the only way she knows how, with wit, warmth and hilarity.

Feisty, flirty and effortlessly funny Shappi Khorsandi handles every subject with a razor sharp wit, softened only by her deliciously dizzy delivery and endless charm.

Clients often ask about purchasing books for giveaways and delegate packs. Below you’ll find a selection of products by Shappi Khorsandi. Click the images to view on Amazon's website. For bulk orders, please speak with your Booking Agent.

How to book Shappi Khorsandi for your event