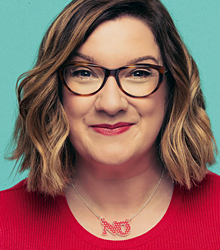 Since winning the 2008 if.comedy Best Newcomer Award at the Edinburgh Fringe Festival for her debut solo show, Sarah Millican's Not Nice, Sarah has risen meteorically to establish herself as a household name, and one of the UK's most commercially successful comedians.

A consummate live performer, Sarah first started performing stand-up comedy in 2004, at the relatively late age 29, following an earlier career as a civil servant. The following year she was runner-up in both the Funny Women and So You Think You're Funny awards, as well as the BBC New Comedy Awards in 2006.

On top of this raft of awards and nominations, Sarah's debut DVD, Chatterbox Live!, is the biggest selling stand-up DVD by a female comedian of all time, selling over 150,000 copies in the first five weeks of release. Sarah's second DVD, Thoroughly Modern Millican Live, was released in 2012 and was one of the biggest selling stand-up comedy DVD's that year, entering the live comedy DVD top 10 chart on its first day of release while her third DVD, Sarah Millican: Homebird, was also a bestseller. Sarah Millican: Outsider was released in November 2016 and went straight to number one in the sales chart upon release and Sarah Millican: Control Enthusiast hit the charts in 2018.

Sarah's very own series, The Sarah Millican Television Programme, combined TV-inspired stand-up and unique interviews with some of her favourite TV stars. It aired on BBC2 in 2012. A second series, (which followed a Christmas Special that year) broadcast early 2013 and notched up an incredible 2.4 million viewers for its first episode, with a third series broadcast in the Autumn of 2013.

Sarah earned two BAFTA nominations for the series for Best Entertainment Performance. In December 2010, Sarah appeared at The Royal Variety Performance performing stand-up to Princes Charles and the Duchess of Cornwall at the Palladium Theatre. She made her second appearance at the legendary variety show in November 2014.

Sarah has also written and performed two series of Sarah Millican's Support Group for Radio 4 and in June 2012 Sarah began writing her own column for national magazine the Radio Times. In 2014 Sarah started Standard Issue, an online magazine for women.

2017 saw the publication of Sarah's debut book How To Be Champion (Orion). The 'part autobiography, part self-help book' shot straight to the top of the literary charts, becoming a Sunday Times Number One Bestseller.

Clients often ask about purchasing books for giveaways and delegate packs. Below you’ll find a selection of products by Sarah Millican. Click the images to view on Amazon's website. For bulk orders, please speak with your Booking Agent.

How to book Sarah Millican for your event