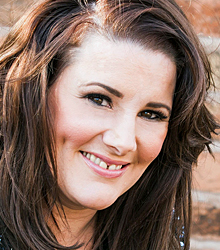 Winner of X Factor 2013, Sam Bailey burst into the public limelight as an inspiring and hardworking mother with an unforgettable vocal talent. A wonderful solo artist who is perfect for large corporate events and functions, Sam is a consummate professional whose ability and repertoire will ensure your guests will enjoy sensational entertainment that provides a highlight to proceedings.

Despite her obvious nervousness whilst auditioning for the tenth series of the X Factor Sam blew the judges away with her rendition of Beyoncé's Listen, receiving a standing ovation and leading Gary Barlow to describe her voice as “incredible”.
Under the mentorship of Sharon Osborne Sam Bailey became a clear favourite on the show, dazzling audiences and judges alike with her stunning voice and natural stage presence. Taking on the likes of Nicholas McDonald and Luke Friend in the final of X Factor 2013, Sam Bailey participated in a duet with Nicole Scherzinger and the following night sang the winner's single – Skyscraper, by Demi Lovato. Sam received more than 1 million votes over finals weekend before being announced as the winner.

Following her triumph, Sam's debut single, ‘Skyscraper', reached Christmas number one and her debut album; The Power of Love stormed to the top of the UK album charts in 2014. Sam Bailey is truly one of the most talented performers in the music business and embarked on her first ever headline tour in 2015 which sold-out venues and received rave reviews.

Sam Bailey can perform a 45 minute set to backing track and delights any audience with her big personality and engaging presence. Sam is also available for longer sessions with a full band if desired. Please enquire for more details.

Sam was extremely easy to work with and was incredibly laid back, happy to mingle with the audience too. Her voice is just flawless and she completely wowed the crowd. It was a pleasure to have Sam at our event and we hope she enjoyed it too!

How to book Sam Bailey for your event