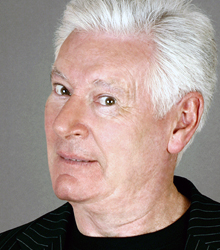 Roy Walker, well known to TV viewers through top ITV game show, 'Catchphrase', has emerged as one of the driest comedians in Britain today.

His lugubrious style of humour his dead-pan expression and his approach to entertaining, has paid handsome dividends. His casual line in patter has endeared him to audiences all over the country.

'To be honest, when I am on stage, I'm just being myself,' he admits. 'I tried all the quick-fire, clever stuff when I started out in the business, but my Irish accent was such that no-one could understand me. I had to slow down my delivery, and the style just developed from there.'

In 1977, Roy broke through to success and national prominence when he recorded the highest marks ever given to a comedian on television's "New Faces". It was the start of a television career that has blossomed ever since, and has seen him starring on all the major TV variety shows including 'Live From Her Majesty's', 'Blankety Blank', 'Des O'Connor Tonight', 'Bob Monkhouse Show', 'Tarby And Friends', 'Paul Daniels Show', 'The Laughter Show', 'Live From The Palladium', 'A Night Of A Hundred Stars', 'Les And Dustin's Laughter Show', 'Laugh Attack', and 'The Russ Abbot Show', besides headlining such series as 'The Comedians' and his own show, 'Licensed For Singing And Dancing'. Roy has also guested on 'Wogan' and hosted the TVS show, 'Summertime Special'.

It was at the beginning of 1987 that he hosted his first series of 'Catchphrase' which has gone on to become a very popular and high-rating addition to the ITV Network scheduling each year since. More recently, it has been screened simultaneously on Challenge TV.

His summer seasons have included the Bournemouth International Centre (1985 and 1991); ABC Theatre, Great Yarmouth (1986); Futurist Theatre, Scarborough (1988); and four seasons at The North Pier Theatre, Blackpool (1987/89/93 and 1995). He has also appeared extensively with Russ Abbot, Shirley Bassey and Tom Jones and toured the country with his live stage version of 'Catchphrase'.

Pantomimes, have also played a big part in his career and he has consolidated his success with Christmas seasons in Dick Whittington at the Southport Theatre (1986/87); Snow white And The Seven Dwarfs at the Hippodrome, Bristol (1987/88); Cinderella at The Mayflower Theatre, Southampton (1988/89); Dick Whittington at the New Pavilion, Rhyl (1991/92); and Cinderella at The Thameside Theatre, Ashton-under Lyne (1994/95) and The Grand Theatre, Blackpool (1996/97).

In September 1998, while he was filming Catchphrase, he was surprised by Michael Aspel - with the big red book - as a subject for This Is Your Life. Roy also appeared in Channel 4's hit TV series Phoenix Nights.

He continues to headline concert, theatre and cabaret engagements throughout Britain and overseas. Away from showbusiness, Roy's interests are golf, horses, skiing and sailing.

How to book Roy Walker for your event

Comedian and king of the one-liner

Comedian and king of the one-liner