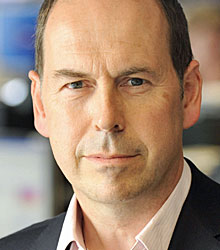 Rory Cellan-Jones was the BBC's Technology Correspondent from 2007 until 2021 and has been watching the technology scene like a hawk for more than two decades.

The hub of technology comment and industry opinion, he is never far from the latest gadget invention, tech trend or globe-straddling innovation. From the dotcom bubble of the late 1990s to the rise of Google and Facebook, from the Psion organiser to the iPad and to the shutdown of the analogue TV mast at Crystal Palace, Rory Cellan-Jones has covered all the big gadget and business stories.

A self-confessed ‘BBC lifer' this was certainly true until 2021; he started his career as a researcher on the BBC Leeds edition of Look North, Rory then worked in the London TV newsroom for three years before getting his first on-screen role at BBC Wales. He later transferred to London and became the business and economics correspondent. Departing the BBC in October 2021 marked a 40-year employment with the broadcaster.

After the dot com crash of 2000, Rory wrote the book Dot.bomb. He has covered issues such as Black Wednesday, the BCCI scandal and Marks and Spencer's competition troubles. He has also evaluated the growth of online websites and companies including the rise of Google and Wikipedia and online retailing.

In 2004 he made an appearance on The Money Programme and he's covered all the big gadget and business stories - interviewing just about everyone who's played a part in the story of the Internet.

In 2007, Rory Cellan-Jones was appointed the BBC's Technology Correspondent with the remit of expanding the BBC's coverage of new media and telecoms, and the cultural impact of the Internet. Rory has been described as "the non-geek's geek", and freely admits that he came late to technology - but he aims to explain its significance to anyone with an interest in the subject.

His blog was recently named among the 100 most influential in the UK by The Sunday Times, and in 2011 he was ranked 40 in the Wired 100 Digital Power List.

Rory Cellan-Jones is popular and highly sought-after on the public speaking circuit as a keynote technology speaker, after dinner speaker, awards host and conference moderator, where he has hosted many high profile events throughout the UK and around the world.

As a keynote speaker, Rory examines technological trends and innovations, providing an insight into what these developments could mean for business and their potential applications in commerce.

As a high profile broadcaster and journalist, Rory has positioned himself at the cutting edge of the tech industry and frequently communicates with the creators and developers of the latest innovations, bringing with him a unique insider perspective and knowledge to all of his speeches and presentations.

On behalf of the entire Merck team as well as myself, I would like to extend a very warm thank you for your outstanding engagement last Thursday during our event in San Francisco. You set a humorous and yet very professional tone and made everyone feel welcome – both, the audience and the speakers. It has been an honour and pleasure meeting you, thanks again and it would be nice to stay in touch somehow.

Rory acted as a fantastic Chair for the first day of this years Planet of the Apps Conference. He mixed a personable approach, with an inquisitive nature, asking the key questions at the right time. I would have no hesitation in working with him again.

Clients often ask about purchasing books for giveaways and delegate packs. Below you’ll find a selection of products by Rory Cellan-Jones. Click the images to view on Amazon's website. For bulk orders, please speak with your Booking Agent.

How to book Rory Cellan-Jones for your event