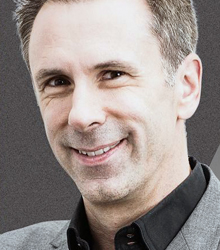 Spencer Kelly presents BBC2’s flagship technology programme Click and, shown in over 200 countries via BBC World News, it allows viewers to watch him indulge his passion for science and technology.

Spencer is a respected broadcaster and journalist with more than twenty years experience in radio and television. Alongside Click, he is a regular guest on BBC Radio 5 Live and Radio 2's Steve Wright in The Afternoon.

Spencer has interviewed many big names in the world of entertainment and technology, including film director James Cameron, Microsoft bosses Bill Gates and Steve Ballmer, and legends Sir David Attenborough, Phil Collins and the Bee Gees. He has also been invited to meet the Queen at Buckingham Palace.

As part of a lifelong love affair with science and technology, Spencer first fell in love with computers when his teacher switched on the classroom's first BBC Microcomputer. From that moment his life was filled with too many programs and not enough girlfriends, something which earned him a double first in Computer Science from Cambridge University. He was subsequently awarded an Honorary Doctorate of Technology by the University of Coventry.

However, at the age of 18, another love interest arrived on the scene, and Spencer became involved with Cambridge University Radio, presenting programmes and also running the station during his final year. Radio was too much of a tempting mistress, and after graduation, he parked the computing for a while, first setting up a charity radio station for the city, and then getting in with a similar project nearer home.

From there he got a ‘proper job’ in local commercial radio, spending two years giving traffic reports from a small plane for Power FM, Ocean FM and South Coast Radio, learning the importance of both a strong local knowledge, and a light breakfast on windy days.

During his career, Spencer Kelly has reported from some far-flung countries across the globe on a range of technology issues – from the latest mobile internet devices in Japan and the crazy walking robots of South Korea, to the life-changing impact of just one computer on an Indian Village, and one SIM card on the slums of Johannesburg.

He has tested satellite broadband in the scorching Namib desert, and been turned into an alien in the studios of Industrial Light & Magic in San Francisco. And he has reported on the re-emergence of 3D movies and TV in Los Angeles.

Spencer Kelly has also pursued some controversial investigations including exposing security loopholes in Facebook, and giving the first television demonstration of a botnet - showing the power available to hacker who take control of a network of infected PCs.

Keynote Speaking
As a sought-after keynote speaker, Spencer Kelly often gives presentations at events about his life as a technology tourist, and looks ahead to the exciting new innovations he has been lucky enough to see in the lab.

He tells stories of tech from around the world, and explains the big trends of the moment - artificial intelligence, automation and blockchain, amongst others - to help companies transform into digital businesses.

Spencer has presented live shows at the Hay Festival, the BBC Radio Theatre, hosts live events and interviews, and has even presented an award at the BAFTAs.

How to book Spencer Kelly for your event