Commanded the 7th Armoured Brigade, the Desert Rats, during the 1991 Gulf War 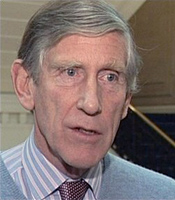 In 1995, Patrick Cordingley commanded the 12,000 soldiers of the 7th Armoured Brigade, "The Desert Rats" during the first Gulf War, following which he wrote his No1 best-selling book In the Eye of the Storm, an account of leading Britain's largest armoured deployment since 1945. Awarded the Distinguished Service Order (DSO) for his leadership and bravery, Patrick continues to be in demand nationally and internationally as a leading commentator on international affairs. He is a visiting scholar at the University of Hull, where he is a Doctor of Science – his subject was decision-making.

In 2007, The Times Chief Sports Reporter wrote; “...if Great Britain does achieve its stated goal of finishing fourth in the Olympic medals table in 2012, we may have to attribute much of the success to... Patrick Cordingley. If you ask a group of the best young sports coaches in the country, they will tell you that they have learnt as much about their trade from this man as any other.'” The results of Team GB and Paralympic Team GB at London 2012 speak for themselves.

Patrick Cordingley joined the Army and the 5th Royal Inniskilling Dragoon Guards in 1965, having been educated at Sherborne in Dorset. He saw service in Cyprus, Libya, Germany and Canada before attending the prestigious Army Staff College to which he later returned as an instructor. In 1984, he went to the Antarctic as a member of a small expedition. Patrick has written and lectured on the Antarctic ever since and conducted a study to show how small teams work together in extreme conditions.

After the Gulf War he returned to England to set up the new Combined Arms Training Centre. Ten months later, he was promoted to Major General to command the 2nd Division. From his headquarters in York he controlled 55,000 regular soldiers, territorials and cadets based in the eastern side of England. In 1996 he was posted to Oman to be His Majesty the Sultan's military assistant.

Patrick Cordingley retired from the Army in 2000 and became Chairman of a company as well as Chairman of Defence and Security Forum and the National Memorial Arboretum Appeal. He is a Trustee of the Gilbert White's House and Oates Collection museum, a governor of two schools and a member of the Court of the Worshipful Company of Ironmongers. His interests include military history, whale and dolphin watching, tennis, music and theatre.

Patrick Cordingley is in demand internationally to speak, and to give his opinions on leadership, teamwork and dealing with times of crisis. Audiences appreciate his engaging and rather modest personality and his sense of humour. With a clear understanding that every event and audience is different, he tailors each speech individually. He is invited as a keynote speaker, a motivational and inspirational speaker and also as an after lunch or after dinner speaker. He really enjoys question sessions and tackling difficult issues.

Your audience was hugely impressed and entertained and they recommended that we invite you again next year.

Feedback for the event as a whole has been overwhelmingly positive and even more so the comments we're hearing around your wonderful speech.

Patrick, your talk was everything – and more – that I had hoped for. Your very interesting insights gave us all food for thought, delivered with a delightful light touch to entertain us too. I cannot thank you enough for your stellar contribution to making our Celebration Lunch such a success. Everyone who has spoken with me since was hugely impressed – and I am basking in the reflected glory of having invited you!!

Just a line to tell you that Patrick Cordingley was fantastic! The feedback from everyone was superb. He nailed the brief and did a wonderful job for us.

Your closing speech was everything you'd want a closing speech to be – motivational, thought provoking and very entertaining. You got the balance just right and ensured that our Convention ended on a high. The feedback has been incredibly positive and we hope you enjoyed the experience too.

In a poll of 400 delegates attending a conference on Motivation, Risk and Strategy, Patrick's ability to communicate with his audience was rated 3.9 out of a possible 4 – the highest score ever given to any speaker by this multi-national company's delegates.

Patrick was extremely relaxed and very good at mingling with our guests and attendees, adding to the enjoyment of the occasion. We wish we had asked him to speak for much longer.

The seminars were excellent. The turnout, and feedback we have received, was very positive and the delegates found your presentations informative and inspiring. Thanks again for your time and support to our Leadership Seminars and for making them such successful events.

Clients often ask about purchasing books for giveaways and delegate packs. Below you’ll find a selection of products by Patrick Cordingley. Click the images to view on Amazon's website. For bulk orders, please speak with your Booking Agent.

How to book Patrick Cordingley for your event