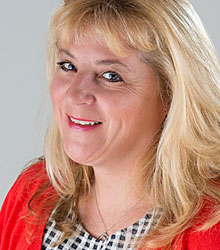 Maxine Hulme was appointed Deputy Assistant Commissioner for the Metropolitan Police in 2012. Serving as one of the force’s most senior officers, she rose through the ranks of one of the most highly pressured working environments that exists, and in doing so was awarded the QPM for her services to policing.

Following the 2015 Paris terrorist attacks, Maxine spearheaded the largest counter terrorism exercise the UK has seen – a multi site scenario with key partners, which saw her advising and liaising with the Government to ensure the Prime Minister and Cabinet were fully prepared and equipped to hold COBRA meetings during the two-day event.

Maxine has served as both Transformation Director and Central Operations lead in one of the most senior posts within this organisation, consistently delivering exceptional results in the management of complex, significant and high-profile investigations and operations.

Maxine has risen through both uniform and detective ranks having passed the four month long, residential Senior Command Course while juggling a young family.

She joined the Met in 1986 and served at a variety of Boroughs within South London in both uniform and detective roles. She developed an interest in covert policing and pro-active crime during this time. During 1999, Maxine joined Specialist Operations and subsequently became part of the Specialist Crime Directorate as an SIO.

During this period she worked within the kidnap unit, Arts and antiques and cheque and credit card squads. She also took responsibility for investigating high profile and sensitive cases involving the Royal family, politicians, and murders of British subjects abroad, corporate blackmail and money laundering.

During 2003, Maxine Hulme was appointed Detective Superintendent, Head of operations - anti Corruption command taking responsibility for serious crime and corruption investigations within the MPS and the protection of resident informants and those informing on police or police staff.

In February 2005, Maxine was selected as Staff officer to the then Deputy Commissioner, Sir Paul Stephenson where she performed a variety of strategic functions on his behalf. When promoted to Detective Chief Superintendent she headed the Covert Policing command where she took responsibility for the strategic co-ordination of covert services including armed surveillance, intelligence, technical surveillance, CHIS authorities, National Undercover Training and MPS deployments, Telephone Investigation Unit and the Central Authorities Bureau.

In June 2008, Maxine was appointed as an Area Commander. At the beginning of 2012, she was promoted to DAC within the newly formed Specialist Crime and Operations (SC&O) Business Group areas of responsibility included Intelligence, Performance, Tasking and Operations (Public Order and Operational Support).

Maxine Hulme received a QPM in Jan 2014 for Services to policing. Her new area of responsibility is the MPS Change transformation (Strategic Design Authority), designing the new MPS Structure and way of policing.

Since leaving policing, Maxine has helped many companies on their transformation journeys including developing workplace strategies, transforming work spaces while increasing productivity and adapting to the ever-changing environment to meet future needs.

Maxine also serves as Chair of the Board of Governors for an Educational Charity Trust in Surrey, moving the trust from significant loss to surplus during her time there.

Maxine Hulme is highly sought-after on the keynote circuit and speaks with authority and a wealth of experience — having delivered keynote speeches at numerous high profile events including those for the NHS, recruitment markets and throughout the Government and National Policing arenas.

She addresses conferences and other corporate events on a number of topics including leadership, security, change and the proverbial ‘glass ceiling’.

This keynote presentation encompasses elements of Maxine’s career and personal experience as well as the following:
• Defining a vision and purpose
• Understanding the landscape and case for change
• Transforming the back office and sharing services
• De-layering and reducing management.
• Pulling the right levers to deliver change
• Clarity on the end state
• Best practice in relation to programme and project management

Cyber Attack - The Invisible Predator
Maxine introduces this speech with an insight of her personal journey to the top including key challenges and emerging threats. She outlines a strategic response to cyber enabled crime and demonstrate how cybercrime is fast overtaking conventional crime types. She then shares with the audience the difficulties in combating this invisible predator and give a range of simple tips and advice on how industry and individuals can take steps to protect themselves.

She will deliver key factors to enable personal and professional cyber prevention, ensuring individuals and industry will ‘be aware and ready’.

The audience will leave with:
• Determination to change practices and join the global fight
• Understand the scale and basic steps to prevent cyber attack
• Inspiration to be ready and prepared

How Thin is The Glass?
Maxine introduces this keynote speech with an insight of her personal journey to the top of the Metropolitan Police, including key challenges and what has made her stronger. She shares with the audience the difficulties and solutions of balancing politics, high profile cases, high-risk operations while battling a white male culture and at times, sexist media reporting.

This speech will include elements of her career and personal experience in addition to:
• How to get to the top
• Promotion and progression challenges
• Disproportionate responses to incidents
• Unconscious bias
• Why anything is possible

She will deliver key factors to achieve personal and professional success which will include, passion, determination, resilience, decision-making, dogged determination and strong leadership.

How to book Maxine Hulme QPM for your event