Organisational theorist and founder of the Hot Spots Movement 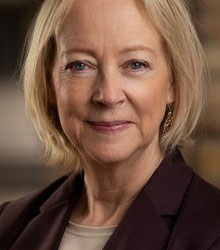 Professor Lynda Gratton is Professor of Management Practice at London Business School where she directs the program 'Human Resource Strategy in Transforming Companies' - considered the world's leading program on human resources. She is also the founder of the Hot Spots Movement. Lynda has written seven books and numerous academic articles and is considered one of the world's authorities on people in organisations.

In 2011 she was ranked by The Times as one of the top 15 Business Thinkers in the world today and in 2008 The Financial Times selected her as the business thinker most likely to make a real difference over the next decade. She was also in the top two of the Human Resources Magazine's HR Top 100: Most Influential poll, and Lynda was number one of Human Resources Magazine's Top 25 HR Most Influential UK Thinkers 2011 poll.

Lynda Gratton's book Living Strategy, originally published in 2000, has been translated into more than 15 languages and rated by US CEOs as one of the most important books of the year. Her book, The Democratic Enterprise, was described by Financial Times as a work of important scholarship and has provided a fascinating insight into how companies will change over the coming decades.

Lynda has received a number of awards for her research and writing. For example, in 2002, her article “Integrating the Enterprise,” which examined cooperative strategies, was awarded the MIT Sloan Management Review best article of the year. Her 2005 case study of BP's peer assist integration practices won the ECCH Best Strategy Case of the year award and went on to win the best case of the year.  Lynda's book, Hot Spots – why some teams, workplaces and organisations buzz with energy and others don't, focused on bringing innovation and energy to organisations. The book has already been translated into more than 10 languages and the Financial Times rated it as one of the most important business books of 2007.

Lynda Gratton actively advises companies around the world and sits on a number of advisory boards. She sits on the Guardian Sustainable Business Awards panel, the FT Business Book of the Year panel and chairs the World Economic Forum council on the future models of leadership.

In 2006 Lynda founded the Hot Spots Movement. Since that time the Hot Spots Movement has become the focus of a global community of many thousands of people all of whom share a passion for bringing energy and innovation to people at work. The movement has engaged with many companies including ARM, BT, Fujitsu, Generali, Philips and Unilever. Lynda is currently engaged with her colleagues on research commissioned by the Singapore Government to examine innovation and team performance across 10 companies in the country and to draw up recommendations for the government.

In 2004, Lynda Gratton was appointed a Senior Fellow of the UK's Advanced Institute of Management Practice. Then in 2006 she was the founding director of the Lehman Centre for Women in Business at the London Business School and as such directed a number of important research programs on work, life balance; women's routes to the top and the attitudes and aspirations of Gen Y. Lynda was elected as a Fellow of the National Academy of Human Resources in 2010.

Over the last twenty years Professor Lynda Gratton has directed six consortia that bring together academics and corporations. The topics have ranged from women in business, strategic HR, cooperation and the future of work.

As a speaker, Lynda Gratton focuses on the issues of business management, the future of business and the impact of corporate practices, processes and leadership.

Clients often ask about purchasing books for giveaways and delegate packs. Below you’ll find a selection of products by Professor Lynda Gratton. Click the images to view on Amazon's website. For bulk orders, please speak with your Booking Agent.

To book Professor Lynda Gratton, please submit an online enquiry, send us an email or speak with one of our friendly booking agents on +44 (0)1372 361 004.

Organisational theorist and founder of the Hot Spots Movement