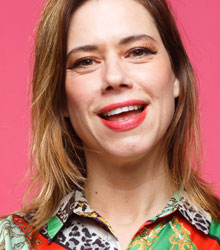 Lou Sanders is one of Britain’s most original comedians, and a fantastic choice for corporate cabaret performances and awards hosting. She is the champion of series eight of Taskmaster (DAVE), co-hosts Mel Giedroyc’s Unforgivable (DAVE) and other recent television appearances include The Late Late Show with James Corden (CBS), Live at the Apollo (BBC), QI (BBC2), Would I Lie to You? (C4), 8 Out of 10 Cats Does Countdown (Channel 4), Richard Osman’s House of Games (BBC), Hypothetical (DAVE), Aisling Bea’s sitcom This Way Up (C4), Roast Battle (Comedy Central), and The Russell Howard Hour (Sky 1).

Lou’s 2018 stand-up show Shame Pig received rave reviews, added extra shows at both the Edinburgh Fringe and sold out three separate runs at London’s Soho Theatre. The show subsequently toured and was named a top show to see by publications including The Guardian, The Scotsman, The List, The Mirror and The Evening Standard.

Lou returned to Edinburgh in 2019 with Say Hello To Your New Step-Mummy which again was critically acclaimed and sold out its full run. She has also made stateside performances in LA and New York.

Thank you, Lou, for a smashing job last night! The comedy was seamlessly delivered and very well received from our guests so much so we’ve seen some lovely social from guests too. The client was super happy.

This afternoon was great! Lou was brilliant, and lovely and down to earth - suited us perfectly I think! Had a few guys message to say thanks and that they really enjoyed it so definitely gone down well!

Your performance was epic - in the BEST way! And is still being talked about as the moment of the night.

It went really well, Lou’s set was so good. I loved her show ideas!

How to book Lou Sanders for your event