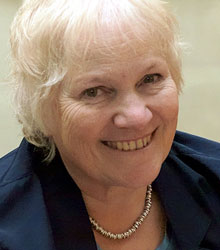 Libby makes an entertaining and informative speaker, and she can often be found hosting events and award ceremonies or acting as a judge.

She was the youngest and first ever woman presenter of the Today programme, and presented Midweek since 1983, as well as having fronted The Learning Curve and numerous documentaries for BBC Radio 4.

Libby Purves is a major columnist for The Times and writes for many other publications including the Daily Mail. She was awarded the OBE for her services to journalism in 1999 and was Columnist of the Year in the same year. Libby accidentally edited The Tatler for 6 months in 1982. Equally accidentally, she was persuaded into doing a successful stand-up comedy routine for Comic Relief in 2009.

As an author she has written a series of books on childcare and family life, as well as numerous well-regarded novels. She has published a memoir on radio and a classic account of sailing around mainland Britain.

As the daughter of a travelling diplomat, Libby Purves was educated in Israel, Bangkok, France, Johannesburg, Tunbridge Wells and at St Anne's College Oxford, where she obtained a first class honours degree in English Language and Literature.

Libby Purves is a writer and broadcaster par excellence and has that certain something which combines natural wit with an incisive perception. Her interests are education, parenting, sailing, travelling and theatre.

Your input was just brilliant and was extremely well received the by the audience – who because of their varied nature could have been quite challenging at that point – but you informed, stimulated and amused in equal proportions – people loved it.

I would like to thank you personally for the keynote address at the Education Conference. We have received many positive comments and know your session was greatly appreciated by the delegates.

Thank you very much indeed for your stimulating, thoughtful and entertaining chairing of such a memorable 'In Conversation' event with Harriet Walter and Jill Kennington. It was a great success and thoroughly enjoyed by everyone who came. Harriet was delighted by the response to both the event and the exhibition.

You were really engaging and very entertaining. Your interaction with the sponsors and our winners was fantastic, and brought a relaxed professionalism to the occasion which was just what we wanted. So thank you for setting the perfect tone.

Libby Purves was a fantastic after dinner speaker and went down a storm!

On behalf of all at FFI, please accept our sincere thanks for the marvellous interview that you gave with Sir David Attenborough. We have been receiving lots of compliments and have been inundated with praise, thanks and congratulations! Thank you very much indeed for your support and for making this such a special event – it is greatly appreciated

Libby Purves was a pleasure to work with!

Clients often ask about purchasing books for giveaways and delegate packs. Below you’ll find a selection of products by Libby Purves OBE. Click the images to view on Amazon's website. For bulk orders, please speak with your Booking Agent.

How to book Libby Purves OBE for your event

Television presenter, journalist and former editor of The Independent on Sunday

Television presenter, journalist and former editor of The Independent on Sunday