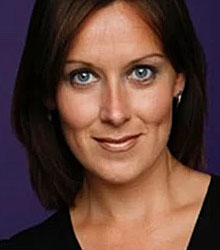 Lee McKenzie is a highly respected broadcast journalist and presenter who has covered some of the biggest news and sports events of recent times. She is best known for her work in Formula One, presenting and interviewing the drivers for Channel 4 and previously BBC TV.

As well as F1, Lee covers the Olympics, Commonwealth Games, Wimbledon, 6 Nations Rugby and Olympia for BBC as well as the Paralympics for Channel 4.

Lee started her career as a written journalist at the age of 15 before joining Border TV as a trainee. Lee also holds the distinction of being the youngest person in the UK to present the news having made her anchoring debut on Border TV at the age of 22 after just 12 months with the station.

Having started her career in News, Lee's journalist training was put to full use as she covered the big stories of the day, from the Lockerbie Trial, General Elections, the opening of the Scottish Parliament to major court cases.

Lee McKenzie comes from an equestrian background and has a deep knowledge and affection of horses and she is a patron of World Horse Welfare. Lee's love of the countryside lead to her presenting on BBC Scotland's rural programme Landward, where she would cover a diverse number of stories from training with police horses to spending a week at Aviemore Wildlife Park looking after Polar Bears and Amur Tigers.

The other side of Lee's life as a broadcaster sees her travel the world as part of Channel 4's exciting Formula 1 coverage where Lee presents and reports across the weekend's action.

In 2016 Lee had a hugely exciting and packed summer, including being a key part of the BBC's Wimbledon presentation team and being in Rio as a senior reporter/presenter for both BBC Sport and Channel 4's Olympic and Paralympic coverage respectively.

Lee McKenzie is a natural writer and highly regarded journalist having written features and comment pieces for almost all national newspapers as well as magazines and many websites.

Lee is very much at home on radio as well, having presented BBC Radio 5 Live's Weekend Breakfast Show. Lee's distinctive Scottish accent has been used to voice numerous TV series and documentaries.

Lee has made history by becoming the first female recipient of the Jim Clark memorial award, which acknowledges achievements within the world of motorsport and the motoring industry

How to book Lee McKenzie for your event