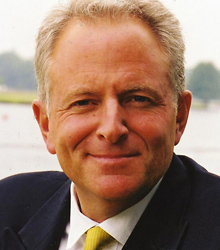 Larry Hochman spent 10 years in Senior Management roles with British Airways and the loyalty management company, Air Miles, in both New York and London. His roles included Director of Customer Service and separately, Director of People and Culture – Larry being the first person in Britain to hold this title. He is a globally recognised expert on customer relationships, corporate culture, leadership and the future of HR.

Since 1998, he has been running his own speaking, mentoring, and consulting business. Larry is one of the most popular keynote speakers in the world and has now delivered nearly 500 speeches in 60 countries and has spoken on every continent.

He also was a pioneer of corporate mentoring in Europe and has been the personal mentor to many top executives. Originally from America, Larry has lived in Europe for the past 22 years and currently resides in both London and Venice. His best-selling book 'The Relationship Revolution', focused on customer loyalty in the digital age, was published in 2010.

Larry Hochman delivers talks around the globe on the subjects of consumer rights, marketing, leadership and change management.

His latest speech topics include:
- The Customer Experience – Your Only Priority
- Transformational Leadership in a Changing Environment
- The New Marketing – Customers Do It For You
- Creating a Collaborative Culture of Change

Your startling appraisal of the way business is likely to change in the next few years was sobering and thought provoking. This is exactly what is needed to help our business managers 'think outside the box' about ways in which their own markets may change and how they can adapt themselves to exploit the opportunities that presents. At the same time your messages in so many different ways fit well with the overall 'Think Customer' theme for this year's Forum.

A lively and passionate presentation.

Clients often ask about purchasing books for giveaways and delegate packs. Below you’ll find a selection of products by Larry Hochman. Click the images to view on Amazon's website. For bulk orders, please speak with your Booking Agent.

How to book Larry Hochman for your event