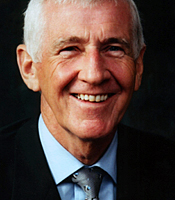 Mr Ryan spent the first 24 years working for the Irish national airline Aer lingus where he was responsible for all operations, passenger and other airline handling contracts at London Heathrow Airport. Retiring recently from Ryanair.

He then joined in Ryanair in its embryonic stage. The company was conceptualised and financed by Dr T.A.Ryan, Mr Ryan's older brother. Working unrelentingly to revolutionise and change air travel within Europe, Ryanairs business model has made air travel affordable to all and changed the way people fly and even the way society works. Mr Ryan headed the major and crucial transfer of establishing the airline to, the then little known airport Stansted and has spent the last few years primarily promoting and marketing Ryanair within Europe. It is of great pride to him that he is a pioneering member of a team that has changed travel within Europe to the extent that in 1985 Ryanair carried 5000 passengers and in 2006 it carried 35 million passengers and is the largest low cost airline in Europe and expects to carry 70 million by 2012.

Mr Ryan takes great delight in passing on his knowledge, enthusiasm and love of Aviation and Tourism and an insight into Ryanairs success on changing aviation in Europe, how it managed change, company culture, leadership, motivation and most importantly of all for any company the unrelenting control of costs. He has the ability with his wit, stories and anecdotes of the industry to captivate any audience, along with his passion for aviation.

The modus operandi on how Ryanair revolutionised air travel in Europe is a fascinating one. This industry had not changed in 75 years and he outlines the methods the company initiated to become the first low cost carrier in Europe and now the largest. Dozens of airlines have tried to emulate Ryanair but none have achieved the same success.

From after-dinner, keynote, conferences, graduations and Q&A sessions, as an international speaker Mr Ryan has addressed companies in both formal and relaxed venues with numbers ranging from 25 to 500 delegates. NCR, McKinsey, The Retail 100 Club (UK's top CEO and CFO), Fujitsu, Lloyds bank, Tetra Pak and the senior officers of USAF in Europe are among the companies who have benefited from his vast knowledge.

How to book Kell (Michael) Ryan for your event