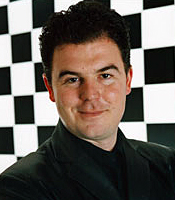 James Allen is one of the most experienced and insightful broadcasters and journalists working in Formula 1 today.

He is currently the F1 correspondent for BBC Radio 5 Live and is the network's lead F1 commentator. James became ITV Sport's lead TV commentator on Formula 1 in October 2001, having deputised for Murray Walker at six races during the 2000 and 2001 seasons.

During James' tenure as commentator, ITV's race coverage won three consecutive BAFTA awards and the Royal Television Society's Sports Programme of the Year award. In 2008 James and Martin Brundle were presented with an Autosport Award for their dramatic coverage of the final laps of the Brazilian Grand Prix, ITV's last F1 race. The BAFTA judges also indicated that the commentary on the final laps had been the decisive factor in swinging the BAFTA ITV-F1′s way.

James Allen joined ITV in 1997 as pit lane reporter having fulfilled a similar role on the American sports channel ESPN since 1993. His sharp, often humorous analysis of team's race strategies and the goings on in the pit lane quickly became a feature of ITV's coverage.

James was born into a racing family: His father Bill was a works Lotus driver in the 1960s, enjoying success in sportscar events like the Le Mans 24 Hours. He studied English and modern languages at Oxford University and joined the Brabham team as press officer in 1990. The following year he drew the short straw when the team hired Martin Brundle and Mark Blundell and James was responsible for ensuring them a good press!

He moved into journalism in 1992 as Autosport's news editor. Two years later he went to America to present Nigel Mansell's IndyCar 94 on ITV. He was also an F1 pit reporter for American sports network ESPN from 1993-96.

James Allen co-wrote Mansell's best selling autobiography in 1995 and in 1998 he followed it up with a second book: Michael Schumacher, Driven to Extremes. His biography of Schumacher, The Edge of Greatness was published in 2007 and is considered the definitive book on the seven times world champion. James has also been the F1 correspondent for the Financial Times since 1999.

In 2011 James Allen was elected by his peers in the F1 media centre to represent them as one of four international journalists on the FIA Press Council.

He is a Trustee of the Grand Prix Mechanics Trust and has been a Patron of F1 in Schools for almost a decade. He lives in North West London with his wife Pip and sons Enzo and Emerson.

James Allen's profile continues to increase constantly as Formula 1 reaches mass audiences around the world, which has resulted in his demand as a host of corporate events and as a speaker in his own right.

Clients often ask about purchasing books for giveaways and delegate packs. Below you’ll find a selection of products by James Allen. Click the images to view on Amazon's website. For bulk orders, please speak with your Booking Agent.

How to book James Allen for your event