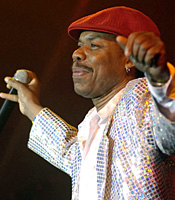 Hot Chocolate have been in existence for 29 years and have a list of hit singles which include titles - 'You Sexy Thing' - 'Every 1's A Winner' - 'It Started With A Kiss' and 'So You Win Again' plus a host of others. They are the only band to have had a hit every year in the British charts during the 1970's.

In 1986 Errol Brown left the group to pursue a solo career. The following year Hot Chocolate were enjoying chart success in Germany with 'Never Pretend' written by group member Harvey.

The band have toured extensively over the years playing such prestigious venues as Buckingham Palace for the royal wedding party of the late Princess Diana and Prince Charles and more recently they played at the film premier of 'Titanic'. Hot Chocolate enjoyed one of their busiest years following their recent chart success after the film 'The Full Monty'.

The band found a new singer Greg Bannis and keyboard players Andy Smith & Steve Ansell. Since 1992, the band has enjoyed years of continued success touring all around the world performing to many thousands of fans who love the music of Hot Chocolate. In 1997 the classic single "You Sexy Thing" reached number one in the charts after it was featured in the movie 'The Full Monty' and a new Hot Chocolate 'Greatest Hits' compilation released in October 1997 reached number 10 in the album charts.

In 2010 singer Kennie Simon replaced Greg Bannis on vocals creating what many are saying is the best sound ever.

Highly popular for both corporate and private events alike, within the UK and around the world, don't miss this fantastic disco band from the 70s / 80s.

There are six band members who will perform up to one hour on stage plus an encore.

How to book Hot Chocolate for your event