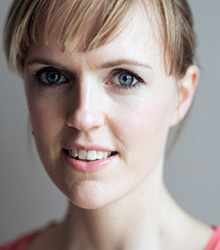 Holly Walsh is a comedy performer and writer, known best for her work on both TV and radio.

Holly has won herself plaudits aplenty. As a 2006 finalist in the annual stand-up comedy competitions, Hackney Empire New Act of the Year, and So You Think You're Funny?, Holly went on to win the Chortle Awards' Best Newcomer award in 2008.

After reading Art History at Cambridge University, Holly went onto work in the art world in small, contemporary art galleries in east London. Whilst working in galleries, she attended comedy writing evening classes including Stand Up And Deliver, and ened up writing for Jo Caulfield's radio show, It's That Jo Caulfield Again, on BBC Radio 4 in 2006/2007.

In 2006 Holly switched to comedy full time, retiring from the art world. She immediately started to win people over, including Frank Skinner who asked her to work on a pilot TV project, Frank Skinner's Skateboarding Dog. She continued to write for various TV and radio shows, including The Charlotte Church Show (Channel 4), Laurence & Gus - Hearts & Minds (BBC Radio 4), The Wall (BBC 3), That Mitchell and Webb Sound (BBC Audio) and The News Quiz (BBC Radio 4).

Holly Walsh's most recent television appearances have included featuring as a guest panellist on BBC 1's Would I Lie To You, and on Channel 4's You Have Been Watching. She has also featured on 8 Out of 10 Cats, and made a gallant appearance on BBC 2's Mock The Week, showcasing her ability to whip up razor-sharp one-liners. She has also appeared as a guest on Celebrity Big Brother's Big Mouth, and BBC Northern Ireland's The Blame Game.

In 2009 Holly co-hosted the Channel 4 cult comedy and entertainment programme TNT Show, and acted as a guest panellist on Never Mind The Buzzcocks. She also appeared as a guest on Big Brother's Little Brother.

A purveyor of skillfully crafted one-liners, Holly Walsh makes a great stand-up for any event. With the ability to tailor her material towards her audience, Holly is wonderfully suited to the corporate scene. Holly also makes for a brilliant events host, and has much experience of working in live environments, from small events to large-scale festivals.

Holly Walsh could be described as the Rice Krispies of the comedy world: she's gifted with snappy wit and crackling talent and has polished a standup routine that is as feel-good and funny as the best bubble gum pop. Truth be told, we've fallen a little in love with her.

She peppers her set with callbacks and clever asides and has easy charm.

How to book Holly Walsh for your event