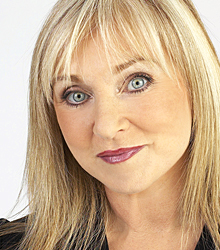 Helen Lederer is one of Britain's best known familiar faces in the field of comedy, writing and acting. She acts, she does stand up, she writes columns - there are the TV shows, radio shows, one woman shows, she does voices, she does after dinner speeches, she talks about wine, she writes about wine, and she drinks wine. And more recently, she's proved she candive off a3 metre diving board!

After a degree in Sociology, half an MA in Criminology, followed in later life by two doctorates which she was more than grateful to receive without having to do anything, Helen also trained at the Central School of Speech and Drama before embarking on her career in stand-up comedy. She wrote and performed her own material at London's famous Comedy Store as part of the early 80's comedians including French and Saunders, Rik Mayall and Harry Enfield.

Helen was a guest on ITV's Saturday Night Live with her solo comedy act and in sketches with Harry Enfield as well as performing at the first Just for Laughs Comedy Festival in Montreal along with Lenny Henry. Her breakthrough into television soon made her instantly recognisable as one of Britain's best-known comedy character actresses. Helen Lederer still continues to perform stand-up comedy and recently had a sell out run at the St. James Theatre with her show Why The Fuss?

From Helen's early days at the famous comedy store - to creating 'the Girl at the Bar' in BBC's Naked Video, not to mention Catriona in Absolutely Fabulous - Helen Lederer has starred in most top TV and radio shows including One Foot in the Grave, Bottom and The French and Saunders Show. Helen Lederer has presented many thought-provoking programmes including Heaven and Earth (BBC), Falling in Love Again (Anglia) and Here's one I Made Earlier, a celebration of Blue Peter for the BBC.  She has co-hosted Wogan, been team captain on Going For A Song and appeared several times on Ruby Wax's television show as a 'foil' for Ruby's guests. Helen is a regular guest on various Radio 4 panel games, especially where a mix of humour with knowledge is required, including The News Quiz, A Good Read, Just A Minute, Open Book , Home Truths when standing in for the late John Peel, plus slots on BBC Radio 4's Woman's Hour  Helen Lederer has appeared in the West End in the Vagina Monologues, plus various theatre plays including Calendar Girls. In 2004Helen performed at theEdinburgh Festival with her own sell-out show Finger Food.
She has a regular column in Woman and Home magazine as well as contributing to The Mail on Sunday, The Telegraph and The Independent.

Never one to turn down a glass of wine, Helen decided some years ago she may as well become an expert in the subject having been delighted with the surprise appointment as wine columnist for The Saturday Express magazine. Shortly after, she was pioneering her own light hearted wine workshops entitled The Show-Off's Guide, gaining the WSET LEVEL 2 (Wine and Sprit Education Trust) qualification in Wine, writing numerous wine columns, appearing in TV guest spots as a wine expert and even writing her own wine sitcom, as well as drinking regularly at wine tastings, if only to keep up to speed with her craft - needs must.

Helen Lederer is in demand as both an after dinner speaker and awards presenter. Her ease with an audience, autocue and thinking on her feet, as well as herding people in to position for group photos and legging it back to the plinth is second-to-none.

Helen is a patron for Water Aid, UNICEF and has been an Ambassador for The Prince's Trust for the last seventeen years, recently hosting a celebration with HRH the Prince of Wales on stage together at Windsor Castle.

Thank you Helen for presenting at our awards. You pitched it just right and our audience loved you! A great mix of hilarity, warmth and understanding of our sector. The way you took the time to chat to our guests during the reception, dinner and after the event was really lovely and you made everyone feel extra special. When can we book you again?!

Just a belated note to thank you once again for giving such a wonderful performance at the Aspire fund-raising lunch in Bushey. You pitched your talk perfectly for the audience and it was a great success for our coffers. I don't think I have ever seen an audience laugh along with a speaker so much. There was a genuine warmth in their reaction to you.

Clients often ask about purchasing books for giveaways and delegate packs. Below you’ll find a selection of products by Helen Lederer. Click the images to view on Amazon's website. For bulk orders, please speak with your Booking Agent.

How to book Helen Lederer for your event