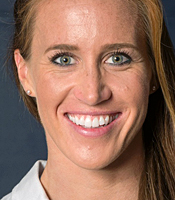 Double Olympic champion, three-times world champion, twice European champion and a multiple world cup gold-medal winner – Helen Glover is one of the most decorated athletes in the GB Rowing Team.

Helen Glover was one of the most prominent sporting stars to emerge from the 2012 Olympic Games, typifying the ideal that hard work breeds success. Alongside her rowing partner, Heather Stanning, Helen wrote herself into the British history books by not only winning Team GB's first Gold of the Games but claiming British Rowing's first ever female Gold Medal.

Born in Truro, Helen showed sporting promise from an early age competing internationally as a junior in cross country and training in the England Hockey Satellite Squad. After completing a degree in Sport and Exercise Science along with a PGCE Helen began teaching PE at a primary school in Bath.

It wasn't until after the 2008 Olympics in Beijing that Helen first stepped into a rowing boat. Inspired by the Olympics, she was determined to be part of the world's greatest sporting event and was talent spotted through the Sporting Giants scheme. Gaining a place on the GB Rowing Team's Start programme, Helen quickly progressed and won the senior single scull at Women's Henley in 2008 and came 3rd in the Eight at the 2009 Head of the River regatta.

The pair announced themselves on the World stage in 2010, competing in the World Cup Series. At the 2010 World Rowing Championships from Lake Karapiro in New Zealand, Helen gave a breakthrough performance in the women's pair to win a Silver Medal behind the reigning World Champion home crew.

This fantastic achievement made Helen the first athlete on the Sporting Giants scheme to win a medal at a senior World Championships. The following year, alongside her partner Heather, Helen became British Champion in the pair before winning Gold in both the Munich and Lucerne World Cup regattas and another Silver Medal in the 2011 World Championships in Bled, Slovenia.

Helen entered the 2012 Olympics with an unbeaten record in the World Cup series, winning all three meets, and the hopes of a nation on her shoulders. The pair cruised through the heats and lined up for the final the favoured crew. With a spectacular demonstration of power and determination Helen and Heather pulled clear of the field and maintained their lead to the line, winning Team GB's first Gold of the London Games and a first ever Olympic Gold Medal for British women's rowing.

2012 then concluded in spectacular style for Helen as she was not only crowned the Superstars Champion for 2012 after convincingly sweeping aside all challengers, she also received an MBE after her Olympic success and her outstanding women’s pair partnership with Heather Stanning thrived under the guidance of coach Robin Williams when they became the first British female rowers to successfully defend an Olympic title, winning gold at Rio 2016.

That completed a perfect Olympiad in the pair – she won every race she competed in and claimed a hat-trick of world titles, one with Polly Swann and two with Stanning.

After stepping away from rowing to get married and have three children, Helen Glover returned to the team in 2021 with the goal of being the first mother to compete for the GB Rowing Team.

How to book Helen Glover MBE for your event