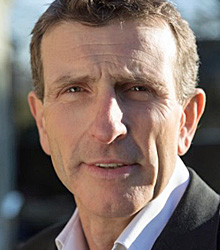 Imagine being able to apply a winning performance mindset to everyday work situations such as making presentations razor sharp; wowing new clients; being in control during performance appraisals; staying cool during even the most hectic and pressurised days; maintaining your self-belief even when things go wrong; and, making the right decision at the right time.

Dr Steve Bull is a chartered psychologist, speaker, author and ‘high performance consultant’. During his 30 year career he has coached CEOs, Olympic Gold Medalists, NATO officers, professional actors and university academics. He has served as the Great Britain Team Headquarters Psychologist at 3 Olympic Games - a role which involved working across all sports with athletes, coaches and team managers. He also worked with the England Cricket Team for 17 years - during which time he fulfilled the roles of team psychologist, leadership coach and change management consultant.

Steve has worked in the corporate world as a coaching psychologist since the late 1990s and has consulted with a wide range of companies in Europe, the USA and the Middle East. His ‘key’ areas of business consultancy fall within three categories - executive coaching, leadership team effectiveness and resilience in the workplace.

He is the author of several books - the latest of which “The Game Plan: Your guide to mental toughness at work” has received considerable praise and sold in more than 10 countries around the world. He has also provided numerous expert interviews on national TV and radio, including BBC, ITV, Channel 4, Channel 5 and SKY news broadcasts.

Dr Steve was a university academic for 14 years, earned a PhD in Applied Psychology in 1990 and in 2006 was awarded an Honorary Doctorate for “outstanding work as a sport psychologist at national and international levels”.

Dr Steve Bull is an accomplished motivational speaker who consistently inspires and impresses his audiences through his ability to deliver in an entertaining style combined with material of real substance.

Resilience At Work
The challenges facing individuals and teams across business sectors are remarkably similar. People are challenged with long working hours, constant change, adversity, setbacks and often extreme pressure. Confidence, clear thinking and resilience are prerequisites for success and will help make the difference between winning and losing.

In his presentations, Dr Steve Bull outlines outlines exactly how individuals can develop a plan for strengthening their mental resilience by the straightforward implementation of a series of practical tips which he has developed through his 30 years of research and consultancy practice.

High Performance Thinking
Steve’s long career working in performance psychology has provided him with a wealth of practical experience, as well as theoretical knowledge, on how to develop high performance thinking. His down-to-earth advice is quickly absorbed by audiences who comment on how applicable his talks are to everyday life as well as the workplace.

Mark Ramprakash, former England Cricketer and winner of the BBC's Strictly Come Dancing commented in his book:- “Mentally performing live is very stressful and tough, but I was able to draw on a lot of things that I had worked on with Steve Bull who had helped me during the second, and most successful, part of my international career.”

Talking Heads Interview Sessions
Of particular interest to many clients, Dr Steve Bull runs ‘talking heads’ sessions with some of the international athletes and coaches with whom he has worked over the past 30 years. In these sessions he conducts an in-depth interview around a set of themes agreed with the client in advance of the event.

Throughout the interview, Steve draws out connections to the world of business so that audience members have really concrete lessons to take away from the event. The many performers with whom he has run these sessions include to the two most successful England Cricket captains ever in Michael Vaughan and Andrew Strauss. From the Olympic world he has run similar sessions with Gold medallist athletes and coaches such as James Cracknell, Tim Foster, Martin McElroy and Shane Sutton.

Steve Bull has an incredible depth of knowledge and his ideas are constantly stimulating and challenging. I admire the way he so easily presents practical models that can be applied in the workplace every day.

I booked Steve to speak at our annual networking event for Finance Directors in the TMT sector. They are a dynamic group and Steve really engaged with them and gave them three useful pointers to take away and apply in a corporate environment. We received a lot of feedback about how much people enjoyed the talk and how they will remember it for a long time to come. I would definitely recommend Steve as speaker.

The application of best practice from high performance sport can make a huge difference in business. Steve Bull captures this brilliantly.

Steve Bull's presentational style has been ideal for our senior managers. He applies his experiences in professional sport and the Olympic Games in ways which both motivate and inspire. He has challenged our managers in ways which will directly impact on their ability to create high performing teams and a winning environment.

Clients often ask about purchasing books for giveaways and delegate packs. Below you’ll find a selection of products by Dr Steve Bull. Click the images to view on Amazon's website. For bulk orders, please speak with your Booking Agent.

How to book Dr Steve Bull for your event