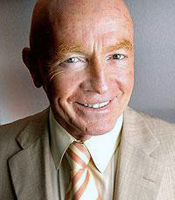 Dr. Mobius has spent over thirty years working in Asia and other parts of the emerging markets world, and has extensive experience in economic research and analysis. Each year he spends over 200 days travelling from one emerging market to another in search of emerging market opportunities.

Prior to joining Franklin Templeton Investments, from 1983 to 1986 he was president of International Investment Trust Company Ltd. - Taiwan's first and largest investment management firm. He had served as a director at Vickers da Costa, an international securities firm. He started in that firm's Hong Kong office in 1980, and then moved to Taiwan in 1983 to open an office and to direct operations in India, Indonesia, Thailand, the Philippines, and Korea. Before joining Vickers, Dr. Mobius operated his own consulting firm in Hong Kong for ten years, and was a research scientist for Monsanto Overseas Enterprises Company in Hong Kong and the American Institute for Research in Korea and Thailand.

Dr. Mobius holds bachelor and master degrees from Boston University; and received his Ph.D. in economics and political science in 1964 from the Massachusetts Institute of Technology. He also studied at the University of Wisconsin, University of New Mexico, and Kyoto University in Japan. Mark Mobius is author of the books 'The Investor's Guide to Emerging Markets', 'Mobius on Emerging Markets' and 'Passport To Profits'.

Clients often ask about purchasing books for giveaways and delegate packs. Below you’ll find a selection of products by Dr Mark Mobius. Click the images to view on Amazon's website. For bulk orders, please speak with your Booking Agent.

How to book Dr Mark Mobius for your event