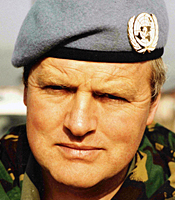 After being commissioned from Sandhurst in 1969 Bob Stewart was an infantry officer for the next 26 years with the Cheshire Regiment. He was promoted to lieutenant in 1971, and in 1974 the Army selected him to go to university as an in-service degree officer at the University of Wales where he took a First in International Politics. He was promoted to captain in 1975.

During his early military career Bob guarded Nazi war criminal Rudolf Hess in Spandau Prison, Berlin. At various times he was an intelligence officer and company commander in Northern Ireland (3 years of operational tours), a Sandhurst instructor, staff officer in Military Operations within the MOD and Military Assistant (Lieutenant Colonel) to the Chairman of NATO's Military Committee in Brussels.

In 1991, Bob Stewart assumed command of 1st Battalion the Cheshire Regiment. As Commanding Officer he was the first British Commander under United Nations command in Bosnia during 1992-93. On returning from Bosnia he was awarded the DSO (Distinguished Service Order). Promoted to Colonel, he then took up the appointment of Chief of Policy at Supreme Headquarters Allied Powers in Europe.

Col Bob Stewart left the British Army in 1995 to become Senior Consultant in the Public Affairs and Corporate Policy Division of Hill & Knowlton. His specialisation there were Government Relations and Marketing as well as Security, Crisis Management and Negotiation. His clients included the Government of Egypt, the Government of Canada, AMEX, and the Paper Federation of Great Britain.

In 1998 he was appointed Managing Director of WorldSpace UK Ltd, a digital radio satellite broadcasting company that operates across the World. On the WorldSpace broadcasting system he set-up and ran the transmission of 21 radio stations internationally from London including CNN and BBC World Service. In 2001 he left WorldSpace to be a freelance consultant - specialising in Leadership, Security, Intelligence, Motivation, Crisis Management, and Hostage Negotiation.

Bob Stewart's book 'Broken Lives', about command during the Balkan War, sold well. He often appears on TV and radio and was an ITV Channel anchor during the Gulf War. In 2004 he wrote and presented a 60 minute BBC film on 'Military Principles in Business'.

Bob Stewart writes occasionally for national newspapers; including The Guardian, Daily Mail, Mail on Sunday and The Herald. He has been a Chairman of the Independent Defence Media Association, representing freelance British Defence and Security journalists. He is also an Industrial Fellow of Kingston University Business and Law School.

In 2010, a new chapter in Bob's career opened when he was elected as the Conservative Member of Parliament for Beckenham, Kent. Bob Stewart had been involved in politics, in one way or another, for many years, having met and or briefed every prime minister since Ted Heath in the early 1970's.

In the British Army, all his staff jobs were either in the Ministry of Defence or at NATO headquarters where day-to-day life was highly political. After the Army he was a political consultant dealing with Westminster for three years.

He has spoken five times at various Conservative Party conferences - including opening the main Defence debate. Col. Bob was also a 'Talking Head' for the Ministry of Defence for seven years.

Your speech was inspired and thought provoking and has energised our senior and middle managers to bring improvement firmly back on their agenda. The key role of excellent leadership during times of change came through loud and clear. Thank you for giving us your time, experience and learning.

Colonel Bob Stewart was purely magnificent. The humility of the man. How he conveyed his very personal story in such a frank and often moving way was simply inspiring. This sentiment has been echoed by the large number of delegates who have taken the time to contact me with feedback on the event.

Thank you for sharing your Bosnian conflict experiences with attendees at our recent UK Business Services Management Team meeting. The presentation that you delivered really did serve to underline the leadership messages that we were looking to reinforce to our management team and, whilst I doubt that many of us will have to rise to the scale of challenges that you faced in Bosnia, I'm sure we'll each be able to call on the messages we heard for future inspiration. Moreover, I have received some very favourable comments from attendees on how much they enjoyed your presentation and how it helped to demonstrate the importance of clear decision making and challenging the status quo when there is a demonstrable benefit.

Col Bob Stewart was superb, he was truly inspirational, a powerful subject and he gave true lessons on leadership. Bob was by far the best conference speaker; he understands his audience and delivers on the brief.

Bob Stewart took a lot of trouble to be briefed, was very well prepared and gave an excellent presentation. A pleasure to work with and highly recommended. The nearest thing to 10 out of 10 you can get!

Thank you for the fantastic speech you did at the PCA Business Summit. We had some excellent feedback from our delegates about the event but especially about your speech which they found relevant, informative and moving. From an event management point of view your reliability and professionalism made you a pleasure to work with.

Bob Stewart was superb, he was truly inspirational, a powerful subject and he gave true lessons on leadership. Bob was by far the best conference speaker, he understands his audience and delivers on the brief.

Please pass on our thanks to Bob Stewart for his excellent presentation. It was a very powerful message and the perfect start to our conference. The delegates from both the UK and all around the world were highly complementary.

Clients often ask about purchasing books for giveaways and delegate packs. Below you’ll find a selection of products by Colonel Bob Stewart MP DSO. Click the images to view on Amazon's website. For bulk orders, please speak with your Booking Agent.

How to book Colonel Bob Stewart MP DSO for your event