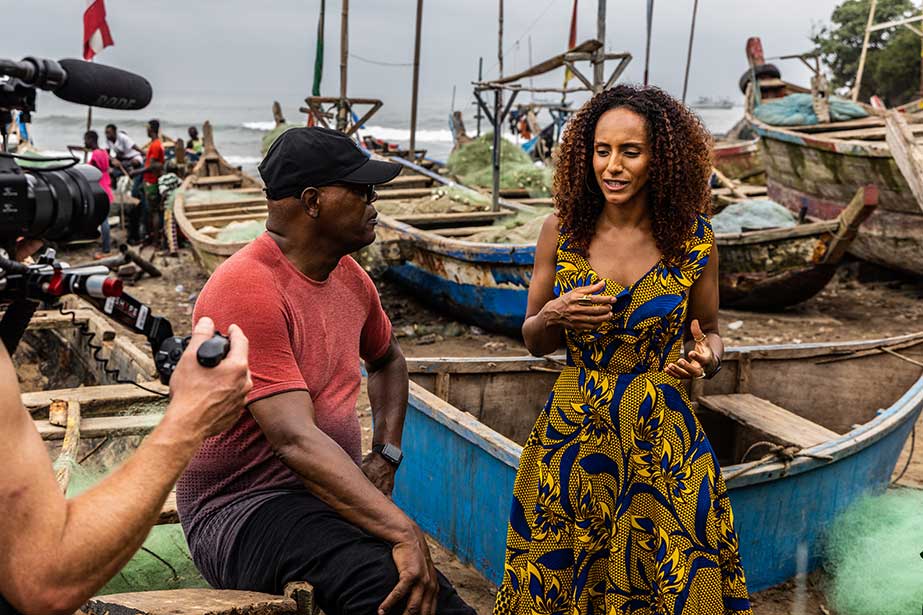 Award-winning journalist, campaigner and NMP Live speaker, Afua Hirsch, has teamed up with Hollywood movie icon and human rights activist, Samuel L Jackson, to feature in a groundbreaking documentary about the transatlantic slave trade, to air on BBC2.

Enslaved: The Lost History of the Transatlantic Slave Trade is a six-part, one-hour series for the US market (“re-versioned” into four, one-hour shows for the BBC) that will see the Pulp Fiction star and author of Brit(ish): On Race, Identity And Belonging, shine a light on 400 years of human trafficking and the millions of Africans who were shipped to the Americas.

Afua Hirsch is a highly sought-after keynote speaker, activist and campaigner on black history, the importance of diversity and inclusion, social justice, race, identity and unconscious bias. Whilst Samuel L Jackson (who also executive produced the series) requires little introduction as one of the most popular actors of his generation. Generating billions in box office revenues, he has starred in global blockbusters such as Pulp Fiction, Jurassic Park, Star Wars and Django Unchained.

Enslaved promises to bring to life both the enslaved people and their European captors using retrieved artefacts and dramatic reconstructions. The show will also use the latest diving technology – advanced 3D mapping and ground-penetrating radar – to locate and examine sunken slave ships across three continents. 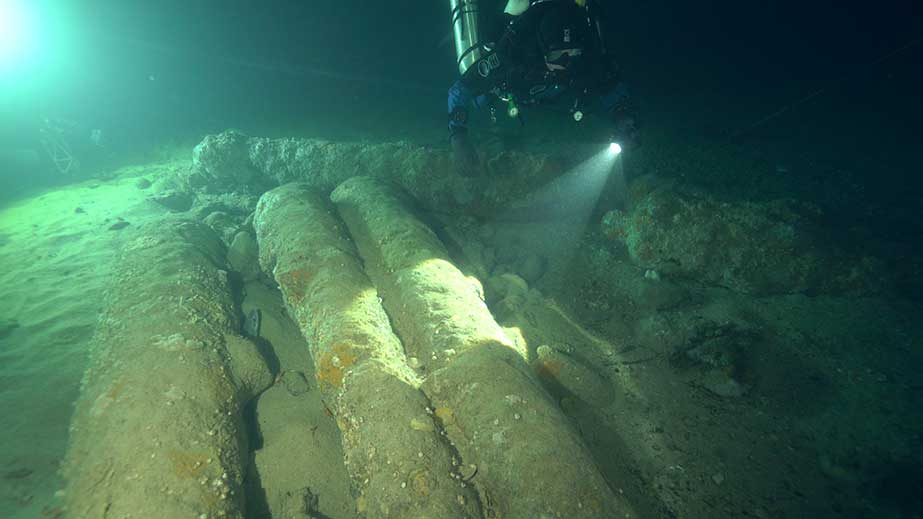 While deep-sea divers will explore sites in the UK, the Caribbean and Florida, experts on land will investigate the stories behind related locations in Ghana, England and the Americas. Visiting former slavery hubs, such as slave dungeons at Elmina in Ghana – where one of Hirsch’s ancestors lived – and introducing a sense of adventure to painstaking research, capturing six dives to locate and examine sunken slave ships, Enslaved documents the enormity and mortality of the slave trade.

Set to premiere in the US as six one-hour episodes, the BBC has opted to re-version the show into just four one-hour episodes and will air in October. The BBC commented “Enslaved provides a fresh and authentic history of the transatlantic slave trade – one that demonstrates to today’s audiences that this is a truly global story. It celebrates the cultures that millions of enslaved people left behind, and the impact those who survived had on world culture today.”

How extensive was the slave trade?

According to Enslaved, as many as 12 million Africans were kidnapped and sold into slavery. Of those, some two million souls were murdered or died en route from Western Africa to Brazil and the Caribbean. Afua Hirsch commented during an interview with Variety Magazine that "the slave trade was conducted by all major European nations and Africans as well. At one point in the 18th century, it accounted for a highly significant part of Britain’s GDP".

When questioned about what interested her in making a documentary that brings to life the inhuman horror of the slave trade, Hirsch commented "One of the things that really appealed to me is that we talk about the history on two radically different levels. It was this global trade and there are statistics about how many millions of Africans were killed and how many were trafficked and how many were stolen, but I think it often comes across as quite an abstract history to people.

"The Atlantic Ocean is literally littered with the wreckages of slave ships. I didn’t know, and many people don’t know that. It really did bring it home to me in a new way that this is all around us. It’s profoundly omnipresent but at the same time invisible." 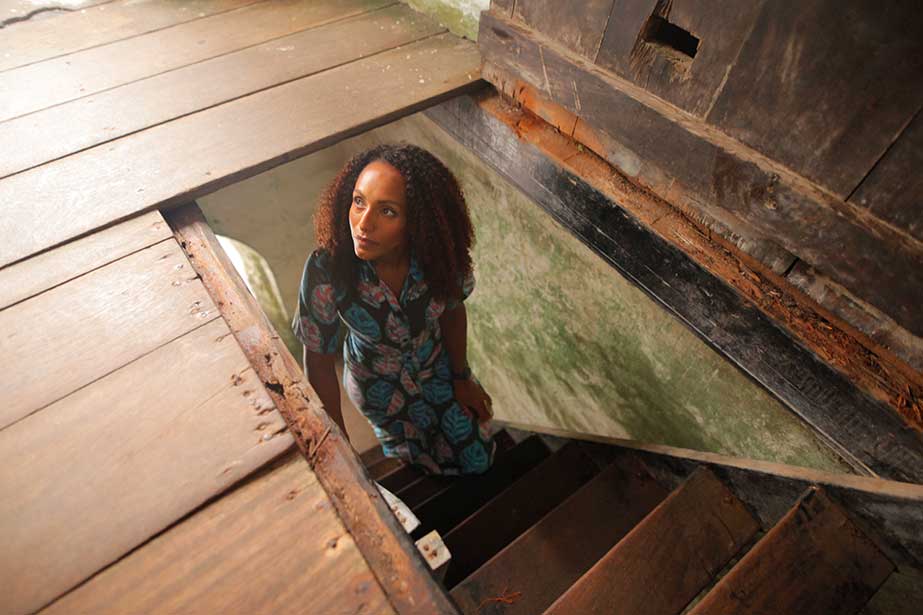 In June 2020, the now-infamous statue of English merchant and philanthropist Edward Colston, erected in 1895, was toppled into the Bristol Channel, as part of the Black Lives Matter demonstrations which followed the unlawful killing of George Floyd by a police officer in the USA.

Bristol's fame and wealth were built on the slave trade some 300 years earlier, and few slave traders were more infamous or wealthy than Colston, who made his fortune almost exclusively through human suffering. Between 1672 and 1689, it's estimated that he owned 40 ships and transported over 80,000 men, women and children from Africa to the Americas. Bristol, and the statue, was a location that Afua Hirsch visited whilst making Enslaved, prior to the demonstrations and the statue's demise.

When does Enslaved air in the UK?

Episode one of Enslaved airs in the UK on Sunday 11th October, 9pm on BBC2, followed immediately by episode two at 10pm.  You can catch a repeat on Tuesday 13th October from 11:30pm. Epsiodes three and four, broadcast on Sunday 18th and 25th October. Check back here for any updates.

Who is Afua Hirsch?

A former barrister, award-winning journalist, broadcaster and human rights campaigner, Afua Hirsch regularly writes for the Guardian and Observer newspapers. In 2018, her first published book, Brit(ish): On Race, Identity And Belonging was awarded a Royal Society of Literature Jerwood Prize for Non-Fiction and is an Amazon best-seller. She is currently a regular contributor to Sky News debate show The Pledge, and participates in other mainstream current affairs programmes. 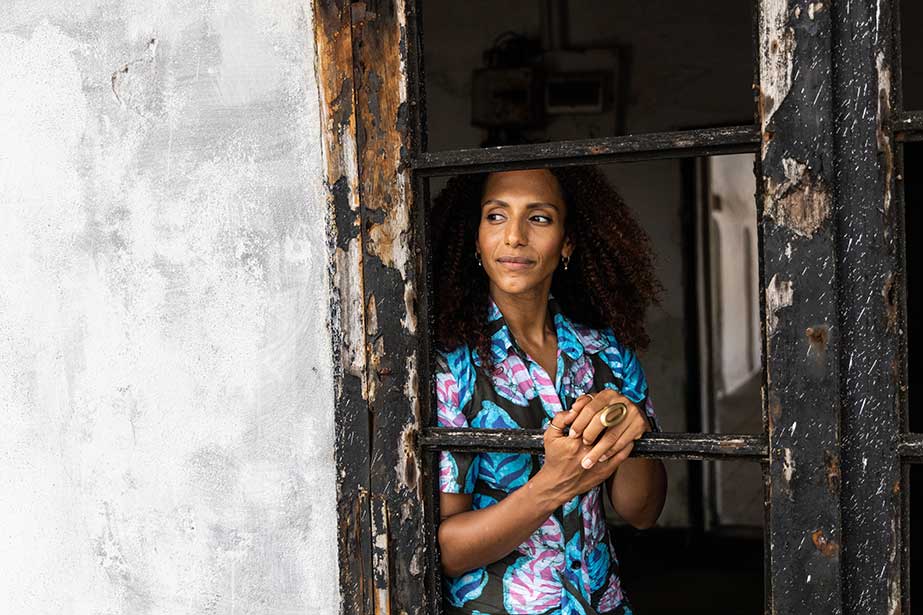 She frequently gives keynote speeches around the world on current affairs, the media, the importance of diversity and inclusion, social justice, race, identity and unconscious bias, having hosted or spoken at events for Google, YouTube, London Stock Exchange, Facebook, the British Library, LSE, the University of Oxford and The FA. Find out more about Afua Hirsch by visiting her profile. And find out more about all of our Black History Month speakers by clicking the link.