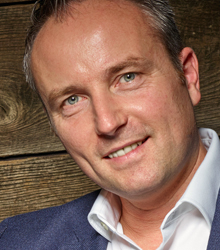 Bernard Marr is an internationally best-selling business author, keynote speaker and strategic advisor to companies and governments. He is one of the world's most highly respected experts when it comes to business performance, digital transformation and the intelligent use of data in business.

He is a regular contributor to the World Economic Forum and writes weekly columns for Forbes, Huffington Post and LinkedIn where his articles are read by millions. His expert comments also regularly feature on TV and radio (e.g. BBC News, Sky News and BBC World) as well as in high-profile publications such as The Times, The Guardian, The Financial Times, the CFO Magazine and the Wall Street Journal.

Bernard was born near Hamburg in Germany, where he grew up. He then moved to Cambridge, England to complete his degrees in business, engineering and information technology. He then joined the Cambridge Judge Business School as a research fellow and later Cranfield School of Management. In 2006, Bernard left the business school world to focus on his own company.

He is a major social media influencer with over 1.45m followers on LinkedIn, over 170K fans on Facebook, over 130k Twitter followers, over 20k followers in Instagram, over 18k subscribers on YouTube and an active presence on SlideShare and Xing. He is generally seen as one of the world’s top business and technology influencers.

In fact, Bernard is recognised by LinkedIn as one of the top 5 business influencers in the world.

His books have been translated into over 20 languages and have earned numerous Amazon No 1 bestselling positions, the CMI Management Book of the Year award, the Axiom book award and the WHSmith best business book award.

Today, Bernard Marr is one of the world's most highly respected experts when it comes to strategy, business performance, digital transformation and the intelligent use of data in business. In that capacity he has worked with and advised many of the world's best-known organisations including Accenture, Astra Zeneca, Bank of England, Barclays, BP, Cisco, CRH, DHL, Fujitsu, Gartner, HSBC, IBM, Jaguar Land Rover, Mars, Ministry of Defence, Microsoft, NATO, The Home Office, NHS, Oracle, Orange, Tetley, T-Mobile, Toyota, Royal Air Force, SAP, Shell, the United Nations, Vodafone, Walgreens Alliance Boots, Walmart, among many others.

Bernard Marr is a popular choice for in-company and event presentations because of his vast practical experience with many of the world’s best known companies and governments, his ability to stay on top of the latest trends, his talent to engage audiences through story telling and analogies, as well as his gift to explain even complex business and technology concepts in simple and understandable ways.

Keynote Presentations
In his keynote presentations Bernard Marr has addressed audiences from around the globe at events including summits and conventions, user conferences, after dinner events, breakfast briefings, product launches, in-company events, sales kick-offs, and many others.

Some of Bernard’s most popular keynote topics include:
• Artificial intelligence – the most transformative and powerful technology humans have ever had
• AI in practice (Bernard can deliver customised AI talks for any industry and sector)
• Big Data – the datafication of business and society, impact, challenges
• The 4th Industrial Revolution – why it is here and how to prepare for it
• The future of business – key business and technology trends
• The future of work – the rise of intelligent robots and the transformation of work
• Why blockchain will transform the world (but not yet)
• Strategy – how to get it right and avoid the key pitfalls
• How to measure and manage what matters

Here are examples of presentation titles:
• Competing on data: 4 ways the world’s most valuable asset is transforming every business
• The Internet of Things (IoT): How smart machines are transforming our world
• The big data economy and how to thrive in it
• AI and machine learning: The rise of super-intelligent companies
• Big Data in Practice: How the world’s smartest companies outwit their competition
• Becoming an intelligent company: 5 simple steps to success
• Data Strategy – Why every company is now a data company
• Key Business Analytics: How algorithms are changing everything
• Communicating data for maximum impact: story telling and data visualisation
• Executing a strategy in 5 simple steps
• The Do’s and Don’ts of managing and measuring people performance
• Doing more with less: improving government performance in 3 simple steps
• Winning KPIs – How to measure what really matters

If you are searching for the missing link between Big Data technology and achieving business value - look no further! From the world of science to entertainment, Bernard Marr delivers it - and importantly, shares with us the recipes for success.

Leveraging data to drive competitive advantage has shifted from being an option to a requirement, and Bernard Marr provides a comprehensive roadmap for leaders focused on mapping and assessing their journey.

As we enter the Forth Industrial Revolution, Bernard Marr tells us that it will be those companies that view data as a strategic asset that will survive and thrive. He helps us understand how data can improve decision making, improve operations and be monetised in products and services.

Bernard Marr profoundly challenges many prevailing assumptions about measurement and management. It is your chance to be enlightened. If you feel that you are measuring the wrong things, if you feel you haven't identified all your intangible value drivers, and if, like DHL, you think you should, then talk to him.

Bernard Marr Has A Rare Ability To Make Complex Topics Understandable For Even The Least Technical Among Us...

I Attended Bernard's Talk At The Predictive Analytics Forum In Amsterdam. It Was One Of The Most Inspiring And Informative Talks I Have Ever Seen.

Clients often ask about purchasing books for giveaways and delegate packs. Below you’ll find a selection of products by Bernard Marr. Click the images to view on Amazon's website. For bulk orders, please speak with your Booking Agent.

How to book Bernard Marr for your event