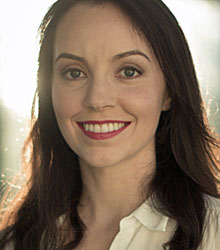 She has an honours degree in biochemistry, and away from the track Stef works as a broadcaster, motivational speaker, actor, and model. She was also a finalist on Celebrity MasterChef 2018.

Born in New Zealand to a Scottish father and an English mother, Stef Reid grew up in Toronto, Canada where she moved to when she was four years old. She then moved to Dallas, Texas with her Canadian husband before settling back in the UK in 2010.

Stef’s talent and passion for sport were spotted early, and at 12 she was already dreaming of playing rugby on the world stage. However, age 15, she was involved in a boating accident, suffering severe propeller lacerations. Her life was saved by a surgeon in Toronto who managed to stem the blood flow, however, as a consequence her right foot had to be amputated.

Sports-loving before the accident, Stef played rugby union but encountered difficulties after her amputation with referees who felt the artificial leg could injure other players. So her focus shifted from sports to her academic studies, and she graduated as valedictorian earning a full scholarship to Queen’s University in Canada to study biochemistry.

While at Queen’s, Stef joined the university athletics team “just to see how fast she could still run”. After joining the campus track and field team, three years later she competed at the BT Paralympic World Cup in 2008. Upon graduation, she decided to put her plans of medical school aside and focus on her childhood dream of being a professional athlete.

With the option to compete for three countries - based on her of place of birth, the nationality of her parents and her place of residence - Stef formerly represented Canada in the Beijing Paralympic Games, finishing third in the 200m and fifth in the long jump.

Stef took the decision to compete for Great Britain soon after the Paralympics in 2008, deciding to follow the nationality of her parents. It wasn't an easy choice but one that has been vindicated with some impressive results.

She spent a year out of competition in 2009 in order to complete her switch and has fully embraced British life, training at Loughborough University. Her husband, Brent Lakatos, is an elite wheelchair racer and won 3 silver medals for Canada at the 2012 Paralympics. He is also world record holder, seven-time Paralympic medallist, and seven-time world champion

Away from the track, Stef Reid made her modelling debut fronting Debenhams’ Diversity Campaign, modelling clothes with the aim to challenge perceived norms of the fashion industry.

Stef worked with inclusively campaigner Caryn Franklin MBE. Following on from this, Stef was invited to join the illustrious ‘Models of Diversity' group, with whom she modelled clothing at the ‘Time for Change' catwalk, as well as at the Ideal Christmas Home Show.

Her standing in the industry has seen her invited to speak to students at London College of Fashion to talk about her experiences as a sportswoman and a model.

Stef was awarded an MBE in the 2018 New Year’s Honours for services to Paralympic Sport.

Stef Reid is an established and sought-after international motivational speaker with a portfolio that includes corporate keynote speeches, event hosting, guest lecturing, and consulting with the Vatican.

She inspires and challenges audiences through her message that excellence is possible for everyone and can speak about a diverse range of topics including The Pursuit of Excellence, Resilience, Adaptive Mindsets, Motivation, Dealing With Failure, Well-being and Human Performance in Business.

Stef has been invited to numerous events for the likes of McLaren, Bloomberg, Sky, BT, VISA, Wunderman, BP and Sigma Aldrich. She‘s extremely comfortable in front of any size audience, with a fascinating story to tell of her career and experiences.

Stef has worked with BP on numerous occasions, bringing a magic and passion to our internal and external audiences alike. Most recently she delivered a powerful keynote speech at the Future Leaders event, which brought together many of BP’s highest potential individuals from around the world. Stef possesses an extraordinary ability to engage every person in the room, sharing her perspectives in a way that is at once engaging, energising and thought-provoking. Stef has a natural speaking talent and an ability to make us all think again about what is possible in life.

Listening to Paralympian and model Stef Reid describing how she had successfully adapted to becoming disabled was inspirational. Stef eloquently articulated the problems of striving to conform to the narrow stereotype of ‘normal’ and encouraged the audience to challenge the current paradigm. She emphasised the need to celebrate difference rather than view it as a reason for exclusion.

I had the honour of watching Stef in the Olympic stadium in 2012 not knowing that a year later I’d be asking her to speak at the PSA MEGA Convention in Manchester. Her story had everyone on the edge of their seats, laughing out loud and in the next moment reaching for their tissues. Stef is a true champion who is not only an inspiration on the track but also on the stage. She brought the house down and I’d pay to watch time after time. A joy to work with and an honour to know her.

How to book Stef Reid MBE for your event