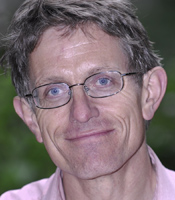 Simon Calder is Senior Travel Editor for The Independent, writing a weekly column as well as one-off articles and features. He also writes for The Evening Standard, High Life (BA's in flight magazine) as well as many other publications.

Known as “the man who pays his way”, because he always pays for all his own travel and never accepts freebies or concessions, Simon Calder owes his love of travel to his parents - and in particular their decision to move to Crawley, a then-new town in West Sussex. He was born beside the A23 on Christmas Day, 1955, and by the time Simon was six, he realised that there was likely to be more to life than this. Fortunately, that summer he joined the Crawley branch of the Woodcraft Folk. They promptly organised a camping trip to the Lake District, and Simon was hooked.

The next significant age was 13, when Simon Calder travelled abroad for the first time, on a school day trip to Dieppe in northern France; unfortunately, learning Russian, not French, was compulsory at his school, so communication was tricky. This was also the year when he started to learn the fine art of free travel by starting to hitchhike. More than four decades later, Simon is still thumbing his way around the world, augmented by cycling.

Simon's first job was a cleaner for British Airways at Gatwick airport. He later worked as a security guard frisking passengers. It was during the long gaps between flights (this was a while ago) that he began to write budget travel guidebooks, starting with the Hitchhiker's Manual: Britain.

After a brief stint teaching Maths in Crawley, and a longer stint as radio engineer at the BBC in London, Simon became travel editor for The Independent in 1994. Soon afterwards he began presenting for BBC2's Travel Show. In 2003 he became a regular presenter for the Holiday programme on BBC1, and in 2007 presented the last film in the final programme of the series, which had run for 37 years.

Simon Calder is regularly interviewed on TV about travel stories and events. He is a frequent guest on BBC Breakfast News, Good Morning Britain, ITV News and, Sky News. He is also the presenter of Global Guru for The Travel Show (BBC 2 and BBC World), where he answers holiday questions from viewers. In December 2011 he was asked to be a contestant on Celebrity Mastermind – his specialist subject was Concorde. To his astonishment, he won. He also contributes regularly to BBC Radio, particularly BBC Radio 4 and BBC Radio Five Live! Not much sleep there, then.

Simon Calder has travelled the world, but still cites his favourite bus journey as the number 11 from Liverpool Street to Camden. Simon always finds that the most interesting stories tend to come from the cheap seats.

Presenting at travel industry events, chairing conferences and after-dinner speaking on the adventures and misadventures of a travel writer, Simon Calder has years of experience with each of these roles.

Engagements include hosting workforce-wide training sessions for a major UK airport; presenting on the future of travel at a range of leading travel industry events; hosting an international conference on passengers' rights; after-dinner speaking and award presentations at a wide range of industry occasions.

I want to thank Simon Calder so much for his fantastic contribution to the judging of the Awards and the wonderful way he came across at the event. His presentation was so engaging and the accompanying slides were hilarious. I've had so much feedback from guests since saying how much they loved listening to Simon's speech.

It was a great evening and Simon was, as ever, a real pleasure to work with. I hope we can persuade him to continue to do be our awards host? Can you please pencil us in for next year now?

We really appreciate the energy and creative thinking you bring to the events we organise on regeneration. The contributions you have made to our Magnetic South Conference, the Making of Medway event and Beyond Brighton Pier have been brilliant and we always look forward to working with you.

Simon Calder is a great front man for our online TV series England TV...he even writes the script! Simon and Charlotte and North East South West have been brilliant to work with and visitor feedback on the films has been really positive.

Simon did a fantastic job on a radio day for our client, travelsupermarket.com. They really enjoyed working with him and we got some excellent pick-up of our story. Charlotte at North East South West was really helpful and easy to work with to set everything up.

Working with Simon as our guest speaker at the Global Refund Forum has been a huge success. The effort he put into understanding our audience and his contribution of ideas was superb. Our clients were thrilled with the response they received back from their guests; he hit just the right balance of being informative and entertaining. We all really appreciated Simon's genuine interest and the amount of time he put into help make the evening such a success. From the moment we contacted North East South West to book Simon we knew we were working with a professional team who have been a real joy to work with.

Simon Calder is the most recognised commentator on the UK travel industry. No matter what event he is attending, his constant motivation to be the best-informed means that he's probably the most prolific journalist in the sector. Simon has been attending ABTA's Travel Convention for many years and he always squeezes the maximum amount of media coverage out of the event for us. He has also been a very popular speaker at the Travel Convention - particularly memorable was when he interviewed Stelios Haji-Ioannou and gave a thorough overview on the status of no-frills airlines.

Clients often ask about purchasing books for giveaways and delegate packs. Below you’ll find a selection of products by Simon Calder. Click the images to view on Amazon's website. For bulk orders, please speak with your Booking Agent.

How to book Simon Calder for your event