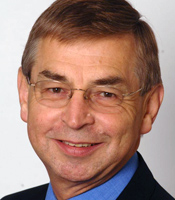 As a seasoned professional with over 40 years of hands on management, technology and operational experience, Dr Peter Cochrane has been involved in established companies at an operational level, the creation and deployment of new technologies, products and management systems, plus the transformation of corporations, and the starting of many new businesses.

This has involved board level responsibility in companies spanning £Bns to £Ms and an individual budget up to £100M with a management loading in excess of 1000 people.

Peter Cochrane's BT career saw a progression from a linesman to R&D engineer before becoming Head of Research and then CTO. With a 1000 strong team engaged in studies spanning optical fiber, fixed and mobile networks, Peter reported direct to the main board and was responsible for developments that would support future IP, eCommerce, eRetail, eLogistics and many other new businesses.

Peter has also been employed in the defence, logistics, travel, retail, energy, healthcare, transport, pharma, and consulting sectors as an advisor, board member, and manager with responsibilities for strategy and operations with budget responsibilities up to £1bn.

As an investor and entrepreneur Peter Cochrane has also engaged in the founding of new companies, investment and the management of growth leading to market success.

He was appointed as the UK's first Professor for the Public Understanding of Science & Technology at Bristol in 1998. Peter Cochrane is a graduate of Nottingham Trent and Essex Universities, he has received notable recognition with the Queen's Award for Innovation & Export in 1990 and Honorary Doctorates from Essex, Robert Gordon, Stafford, Nottingham Trent and Brunel Universities. He was awarded an OBE in 1999 for contributions to international communications.

Over many years of speaking at conferences, company gatherings, dinners and other events Peter has created and developed a broad range of technical, management and general interest talks supported by practical examples, anecdotes and humour. Included below is a sample collection of recent talks delivered to audiences as far apart as London, St Petersburg, San Francisco, Bogota and Kuala Lumpa.

Future Health and Care:
Health systems worldwide are struggling to satisfy a growing demand and a rising tide of customer expectation. But new technologies are pushing knowledge access, self test and diagnosis toward the users. With developments in nan and bio-tech this is about to accelerate with a new range of sensors and treatment/repair options.

Innovation:
Financially stressed times sees companies hunker down, cut costs, rightsize, hoard money, and protect markets. But the tech transformation continues apace along with the industry leaders who 'make hay' to steal a march on the rest. Ultimately, mounting market threat prompts more innovation across the board – products, services, operations, management – everything!

The biggest mistake is to suppose that business will continue as normal and an 'innovation program' is like any other. Hierarchy, heavy duty management, strong project control, and the practices of the past are the enemies of success. Freedom of thought, openness of mind, and multi-disciplinary teams with freedom of action are the key ingredients of success.

Ahead In The Cloud:
Ignoring cloud-based technology is to deny a company and it's people the freedoms and new modes of working that the 21st Century demands. It is no longer a concept, it is a service reality and the lead adopters are realising significant savings and more productive workforces. The big worries around security, reliability, resilience, machine and application control turned out to be unfounded and unwarranted.

What do Machines Think?
Our perception of Artificial Intelligence (AI) has been mired by the immutable fact that we have no description, definition, quantification or measure of intelligence. We simply cannot describe or say what it is! The best we can do is to draw on some general concepts of neuron count and connectedness.
But not understanding something doesn’t mean to say we cannot use and exploit it!

Here we address the most fundamental question; what makes something intelligent? Using a series of logical delimiters we develop an engineering measure of relative intelligence and demonstrate that sensors and sensory systems appear to play a far more important part than memory and processing power.

Clients often ask about purchasing books for giveaways and delegate packs. Below you’ll find a selection of products by Dr Peter Cochrane OBE. Click the images to view on Amazon's website. For bulk orders, please speak with your Booking Agent.

How to book Dr Peter Cochrane OBE for your event