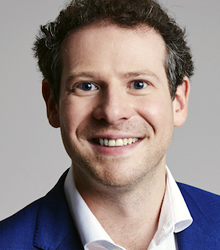 Olly Mann is a presenter, writer and gadget columnist who hosts the weekend evening show on national talk station LBC (Fridays 7pm-10pm, Saturdays 6-10pm). Previously he presented their overnight show, boosting the audience to a 20% share.

His two-part documentary, ‘Podcasting: The First Ten Years’ recently aired on Radio 4 to critical acclaim. He has also hosted on BBC 3CR, and, before joining LBC, was a weekly contributor to BBC 5 Live.

He is the presenter ofThe Guardian’s Tech Weekly, one of Britain’s most popular technology podcasts, andThe Media Podcast, the online talking shop for the UK’s television, print and digital media industries.He has chaired numerous debates, discussions and Q&As with industry personalities at venues including Soho House, The Guardian Edinburgh International Television Festival and The Hospital Club, and has also presented the Screenwriters Lectures podcasts for BAFTA.

With Helen Zaltzman, he co-presents Answer Me This!, the most popular independent podcast in the UK. The comedy show, now in its ninth year, has won two Sony Radio Academy Awards, a European Podcast Award, and 130,000 loyal subscribers. Helen and Olly were the UK’s first podcasters to be given their own radio show, and have since hosted a series of specials on 5 Live – the most recent being ‘Helen & Olly’s Required Listening’.

He writes a regular column for Telegraph Men, and can often be seen reviewing the papers on BBC Breakfast (BBC1), Lorraine (ITV), This Morning (ITV), Sky News and BBC News Channel.

Indulging his life-long love of gadgetry (he has no sense of direction and would literally be permanently lost had sat-nav not been invented), he is the gadget columnist for Reader’s Digest, and the technology correspondent for Steve Wright in the Afternoon (BBC Radio 2). He was also the resident tech expert on The Alan Titchmarsh Show (ITV) during its final series.

He has written for a wide range of entertainment shows including Celebrity Juice (ITV2), Sweat the Small Stuff (BBC3), Text Santa (ITV), Staying in with Greg & Russell (BBC3), Animal Antics (BBC1), and Keith’s LemonAid (ITV). He has also worked as a Producer-Director on The Culture Show (BBC2).
His book, Answer Me This!, is published by Faber.

Olly Mann is a popular host at live events and conferences, having chaired panels and Q&As for The Edinburgh International Television Festival, NextRadio, WebSummit, the Midtown Big Ideas Exchange, The Nottingham Business Expo, the Radio Festival, and The Times Cheltenham Science Festival. He has guest-lectured at Sheffield Hallam University, Bournemouth University, RIG Train, the University for the Creative Arts, Guardian Masterclasses and Dagbladet Information, Copenhagen. In 2017 he was the inaugural host of the British Podcast Awards.

He has had stints presenting The Guardian's digital culture podcast Tech Weekly, for whom he interviewed leading Silicon Valley figures including Instagram CTO Mike Kreiger and HiIlary Clinton's special advisor Alec Ross, and the Screenwriters Lectures series for BAFTA.

Olly Mann also presents speeches on his various areas of expertise, covering everything from his love of gadgetry, the future of technology, the media and pod casting.

He is a popular choice due to his humorous and entertaining presentation style. Olly is available for corporate events as an after dinner speaker, awards host and conference facilitator.

Clients often ask about purchasing books for giveaways and delegate packs. Below you’ll find a selection of products by Olly Mann. Click the images to view on Amazon's website. For bulk orders, please speak with your Booking Agent.

How to book Olly Mann for your event