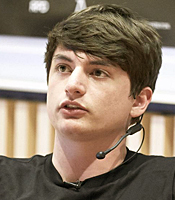 Josh Valman began his engineering career at the tender age of 10 years old, designing his own robot as a result of a fascination and borderline obsession with robotics, inspired by the popular TV programme RobotWars. By 13 years old, he'd sent off his designs and £500 life savings to a factory in China to have the components made.

By age 15, instead of returning home from school and hanging out with his peers, Josh was working as a freelance engineering and supply chain consultant, taking conference calls with China and advising some of the world's largest manufacturing companies on supply chain and engineering. Remarkably, Josh thought, not once did anyone think to ask his age or check his credentials.

At 19, Josh Valman became Managing Director of his own global consulting firm, employing over 60 people around the world supplying some of the world's largest manufacturing businesses from over 100 factories. It was recently valued as a multi-million dollar enterprise.

From their headquarters in London's Westminster, Josh's teams provide product design, manufacture and supply chain solutions to companies across Europe, Asia and America. The company's ‘distributed creativity' model brings together talent and experience from all over the world — making use of the best design minds from precision engineering to sculptors and artists, and with manufacturers specialising in all manner of areas — to look at problems very differently.

Josh Valman's vision was to solve problems from the stage of germinal idea right through to creation/implementation, and in the most efficient and best way possible. The company's vast network of contacts and factories enables them to create anything from a single prototype to a production line run of a million units. Clients include airlines, hotels, manufacturers and retailers.

Josh Valman presents thought-provoking and insightful keynote speches that look at how manufacturing is changing, and in-turn, how that is changing the world. From R&D, innovation, problem-solving, market distribution, supply-chain process, the Internet and the 3D printing revolution, audiences will hear Josh’s lessons in determination, unique-thinking and ultimately his success.

Innovation - how to innovate and take steps forwards as a business.

How To Make Innovation Stick - the upgrade! How to ensure innovation efforts are effective and add value.

How to book Josh Valman for your event