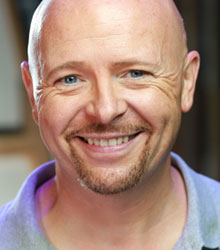 Jon Courtenay was thrust into the media spotlight when Ant and Dec awarded him the Golden Buzzer during his first audition on Britain’s Got Talent 2020.

After his semi-final performance, the judges put him straight through to the live final and he received phenomenal praise from them all. Jon’s genuine nature, huge talent and love for his family has won him a myriad of fans.

Jon started his stage career as a comedy magician but gradually the magic made way for the piano. As a comedy pianist Jon has performed sell out tours all over the UK, Spain and Cyprus. He is also one of the rare British performers, asked time and time again to perform to American audiences.

His originality and remarkable stage presence have led to hugely successful shows in the corporate market as well as on all the major luxury cruise lines.

Although Jon’s show is continually evolving, his sense of humour remains the same and he has now created a truly original experience for every audience.

With music from jazz and classical to rock & roll, original songs and parodies plus hilarious tales of his family, relationships and his life travelling the world. Jon’s show will leave you with a happy heart and a huge smile on your face.

Jon Courtenay performs from onstage from 5 minutes up to 45 minutes.

His show includes music from jazz and classical to rock & roll, along with original songs and parodies plus hilarious tales of his family, relationships and his life travelling the world. It also includes all of his Britain’s Got Talent songs and stories of his BGT experience.

Jon can tailor his show to work for absolutely any event, from large corporates dinners, private parties and special occasions to film premieres and product launches, etc.

Jon can also write bespoke songs for individual companies, events or clients. Please provide at least seven days notice and discuss with your NMP Live booking agent at the time of enquiring.

A remarkable talent and a fantastic showman.

Jon has twice been voted “Comedy Entertainer of The Year”.

Thank you Jon, you totally made the event for us. You were hilarious, warm, genuine and left everyone feeling inspired and so happy! The bespoke song was the highlight of the night and left us all in stitches. We will definitely be recommending you to everyone we know.

The most wonderful act we have ever booked!

How to book Jon Courtenay for your event