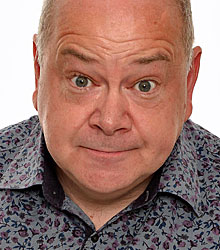 Considered by many to be one of the best comedy magicians in the UK today, John Archer is a highly experienced and versatile performer who attacks the audience with all the skill and panache of a rampant bull with a hangover.

A roller coaster of idiotic sight gags and baffling trickery put John Archer in a class of his own. He's been working as a professional comedy magician for nearly three decades and was working semi-professionally for 10 years prior to that.

Since turning professional, John has won many awards both in the UK and abroad, including 'British Magical Champion of Comedy'. He has appeared twice at the Edinburgh Fringe in 1998 and 1999, starring in his own show and together with comedian and best friend, Tim Vine.

A former police officer with the Cleveland Constabulary in the north-east of England for ten years, in 1998, he was awarded the Ken Dodd President's Trophy for Best New Magical Comedy Entertainer.

In 2002, at The Magic Circle Awards Banquet, Archer was promoted to Member of the Inner Magic Circle With Gold Star, and was also awarded The Carlton Comedy Award for outstanding use of comedy and magic. In 2003, he was awarded the Senator Crandall Award for Comedy at Abbot's convention in the United States, and won The Magic Circle's Stage Magician of the Year competition in October 2008. In 2000, he took part in the British Magical Championships, and was awarded British Magical Champion of Comedy.

In 2011, John Archer appeared on ITV's Penn & Teller: Fool Us, hosted by Jonathan Ross, in which he was pitted against two of the world's greatest magicians, Penn & Teller. In the show, magicians from the UK and around the world attempt to trick magic superstars Penn & Teller; if they succeed, the prize is to open the Penn and Teller show at the Rio Casino in Las Vegas. John Archer was the first magician on the programme to successfully fool Penn & Teller.

In 2012, he appeared in a 13-part series for CBBC called Help! My Supply Teacher's Magic. A follow-up second series, Help My Supply Teacher is Still Magic, aired in 2013 and won a BAFTA in the Entertainment Category at the Children's BAFTAs that year.

More recently, in 2019 John Archer appeared on popular ITV talent show, Britain’s Got Talent, and, whilst gaining four ‘yesses’ from the judges, he was criticised for his previous professional credits. He made it to the top three in the semi-finals, alongside Colin Thackery & Kojo Anim.

John Archer is a popular choice for performing at both corporate and private events, here in the UK and around the world.

You could put John Archer anywhere and he would kill an audience!

Booking an act for my Dad's 70th birthday, I wanted a great act and went straight to John Archer- his reputation in the magic world is among the very best. Hysterically funny, and perfectly pitched for the occasion. He made the evening. I'd recommend him unreservedly.

It saddens me that in leaving the full-time professional world of television when I did, I forsook the opportunity to make John Archer into a star. Without doubt he represents for the new century what Paul Daniels did back in the eighties. Strong magic and great comedy seldom come in the same package. If Eric Morecambe - with an added touch of Les Dawson - had been born a magician, he would have been John Archer. His star must and will shine soon. Promoted carefully, he could even be as big as Tommy Cooper.

John Archer is so funny that it takes you a while to realise that he's also an outstandingly original and innovative magician. He is the outstanding magical entertainer of his generation.

How to book John Archer for your event