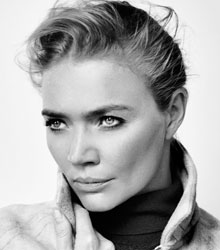 Jodie is a unique example of someone who has fused the worlds of designer fashion and glamorous sports. On the catwalk she is a leading supermodel, and off it she plays Polo to a high level and golf to a handicap of 18.

In 2005 and 2006 Jodie competed in both the All Star Cup Tournament and the Dunhill Links at St Andrews alongside some of the worlds leading golfers and personalities such as Colin Montgomerie, Samuel L Jackson and Hugh Grant.

Jodie is also a high octane Maserati racing driver, where her love of speed and beautiful cars can be seen behind the wheel of an Italian super car. She has competed around Europe in the Maserati Trofeo Series and is a regular at motoring events.

She has also established The Jodie Kidd Foundation which hosts a series of events through out the year to encompass her sporting passions whilst raising money for charity in the process.

She has taken part in several popular television programmes, including BBC One’s Who Do You Think You Are and Strictly Come Dancing. She also presented her own US television show Fashion Avenue, fronted her own BBC Three documentary I Believe in Miracle Healing, and has co-presented Channel 5’s The Classic Car Show and ITV’s coverage of The Isle of Man TT.

Jodie is passionate about sustainability and growing her own vegetables and is a keen cook, having been a finalist in Celebrity MasterChef. In 2017, Jodie opened gastropub The Half Moon in Kirdford and the following year it was awarded 2 Rosettes by the AA.

Clients often ask about purchasing books for giveaways and delegate packs. Below you’ll find a selection of products by Jodie Kidd. Click the images to view on Amazon's website. For bulk orders, please speak with your Booking Agent.

How to book Jodie Kidd for your event