Book James May add to shortlist 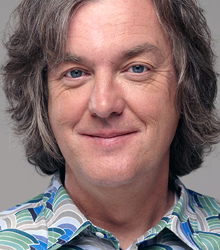 Book James May
add to shortlist
About

James May is best known as co-presenter of the BBC's hugely successful Top Gear export, alongside Jeremy Clarkson and Richard Hammond.

He has also presented a variety of other television documentaries and entertainment programmes on themes including science and technology, childhood toys, cars, food and drink, and the plight of manliness in modern times. James has also co-presented 2 series of Oz & James's Big Wine Adventure travelling through France and California and trying to learn all things about wine.

In June 2009 he presented a documentary on BBC 2 called James May on the Moon, commemorating 40 years since man first landed on the moon. This was followed by another documentary on BBC Four called James May at the Edge of Space, where he was flown to the edge of space (70,000 ft) in a US Air Force Lockheed U-2 spy plane. Highlights of the footage from the training for the flight, and the flight itself was used in James May on the Moon, but was shown fully in this programme. This made him one of the highest flying persons, along with the pilot, at that time, after the SR-71 pilots and the crew of the International Space Station.

James is a sought after motoring journalist writing for Top Gear Magazine and The Daily Telegraph and has contributed over the years to Car Magazine, The Scotsman, Country Life and various technology and travel titles.

James May has a wealth of corporate experience working with many blue chip companies, his relaxed style coupled with his sense of humour, sharp dry wit and exuberant personality make him an ideal choice.

Clients often ask about purchasing books for giveaways and delegate packs. Below you’ll find a selection of products by James May. Click the images to view on Amazon's website. For bulk orders, please speak with your Booking Agent.

How to book James May for your event

Tags for James May