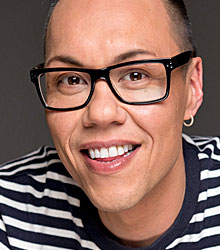 Fashion stylist, award winning TV presenter and national treasure, Gok Wan has taken the fashion and TV world by storm and has become one of the UK's most sought after entertainers.

Initially, Gok studied at London's prestigious Central School of Speech and Drama, but his love of fashion and beauty led him to follow a career firstly in hair and makeup and then in fashion styling.

Gok's ability to give women the confidence to appreciate their bodies, whatever their size, and encourage women whatever their shape and size to strip for the nation, secured his place as a unique TV personality.

Gok Wan has styled celebrities including Bryan Ferry, Blondie and Erasure and has worked for some of the world's leading photographers, including Arthur Elgort, Terry O'Neill and John Swannell. He is a renowned fashion consultant and host of C4's Gok's Fashion Fix and How to Look Good Naked.

Being an expert in all things style and fashion has given Gok the opportunity to offer his advice to viewers on GMTV, The Battle of the Sexes, The Xtra Factor, The Wright Stuff and T4.

His work has been published in numerous magazines including Tatler, Glamour, The Face, Times Style, Marie Clare and Cosmopolitan. He is now recognised as one of the leading fashion commentators and consultants in the UK.

Gok has presented numerous live events including, How To Look Good Naked Live, The Women In TV and Film Awards, Glam in the City (Glasgow) and The Pure Beauty Awards. He has also been a guest presenter at The Brits, The Comedy Awards, The Sunday Night Project, T4 on the Beach and 8 Out Of 10 Cats. Gok also presented live from the red carpet at the first and second premieres of Sex In The City the movies.

Gok'sautobiography was published in October 2010 ("Through Thick and Thin" published by Ebury), as well as featuring in a moving documentary on child obesity 'Too Fat Too Young' for Channel 4. He has also published several cookery books and hosted his own culinary TV show, Gok Cooks Chinese.

He works with a number of charities including: Kidscape (Ambassador), Children In Need, Comic Relief, Tesco's Race for Life, The Starlight Foundation, Make a Wish and many more.

Clients often ask about purchasing books for giveaways and delegate packs. Below you’ll find a selection of products by Gok Wan. Click the images to view on Amazon's website. For bulk orders, please speak with your Booking Agent.

How to book Gok Wan for your event