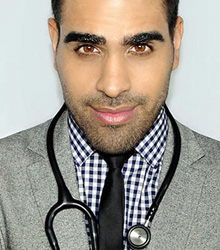 Dr Ranj Singh is a fresh, dynamic and popular personality in the medical media world. He is a successful NHS doctor, specialising in the care of children and young people, and an in-demand television presenter.

Dr. Ranj Singh grew up in Medway, Kent, before moving to London to attend university. He trained at Guy's, King's & St. Thomas' Hospitals School of Medicine and qualified in 2003 with degrees in Medicine and Pharmacology.

Since then he has worked in a variety of adult and paediatric specialities, in a range of district general and teaching hospitals. His interest in Paediatrics led to him specialising in this field, and in 2007 he became a member of the Royal College of Paediatrics and Child Health.

Alongside his medical career, Dr. Ranj has developed an impressive media profile and featured in various projects across TV, radio, printed press and online. He is the co-creator and presenter of the pioneering CBeebies' show Get Well Soon, which he co-created and also has a kids' health segment on ITV This Morning.

Other television appearance include BBC Switch, CBBC Newsround, Channel 5 The Wright Stuff, BBC3 Free Speech, Radio 1 and the BBC Asian Network. Dr Ranj's work can also be found in numerous magazines and websites where he regularly provides his expert opinion on a range of health matters.

Being the only TV doctor who specialises in children, young people and families gives Dr. Ranj a unique and valuable viewpoint. His experience and expertise make him the ideal spokesperson on medical issues in the media, and his charisma, style and natural ability to convey information to any audience have made him a household name amongst children and adults alike.

His growing social media presence and following are testament to his popularity and appeal.

Dr Ranj is available for festivals and other live appearances with his travelling surgery show ‘Dr Ranj’s Teddy Bear Hospital’.

Come and join Dr. Ranj in his travelling surgery! Whether you have a sniffly nose or a sore tummy, this clinic is the place to go! At Dr. Ranj's Teddy Bear Hospital, children get to help him diagnose and treat some of his furry, fuzzy and downright funny friends who pop in with all sorts of health complaints.

Not only is it fun and entertaining, kids will get to learn about the human body and why and how to keep happy and healthy! A blend of music, humour, fun facts and audience participation make this show an enjoyable experience for the whole family.

Dr Ranj proved to be a huge hit with our younger pupils and their parents. His friendly and accommodating personality meant children and parents felt able to chat freely to him. He also showed a keen interest in the school and took the time to walk around and view classrooms and activities. It was a pleasure to have him visit Burgess Hill Girls.

It was a pleasure to deal with NMP Live for the booking of Dr Ranj at our recent Open Morning. Any queries I had were dealt with quickly and professionally by either email a follow up telephone call by the team. Neil kindly organised a conference call with Dr Ranj and myself prior to the event to allow all the finer details to be discussed which was very reassuring. I would certainly recommend future dealings with NMP Live.

Clients often ask about purchasing books for giveaways and delegate packs. Below you’ll find a selection of products by Dr Ranj Singh. Click the images to view on Amazon's website. For bulk orders, please speak with your Booking Agent.

How to book Dr Ranj Singh for your event