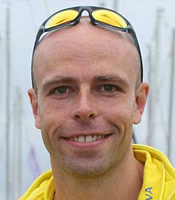 Dean Macey, the "Dean Machine", is undoubtedly one of the biggest personalities in British sport. As an athlete Dean was consistently a favourite of the media and in 2002 Dean took centre-stage on BBC TV as an integral member of the BBC Sport team covering the Commonwealth Games in Manchester, smiling in the face of adversity when injury prevented him from competing.

As a young athlete, Dean Macey's potential as a multi-eventer was not immediately evident, having originally competed in single events. It was not until 1994 that he first competed in a decathlon and immediately broke the English Schools Record. His meteoric rise saw him reach 3rd in the world during the 1999 season, having recorded the second best ever score for a UK athlete; a score which only Double Olympic Champion Daley Thompson has bettered.

Later that year Dean stamped his authority on the world scene at the World Championships in Seville by breaking 6 personal bests to obtain an outstanding silver medal. This magnificent achievement was accomplished at the tender age of 21 and saw him named The BBC's Young Sports Personality of the Year as well as Young Sportsmen of the Year.

The following year Dean was touted as one of Britain's main contenders for Sydney Olympic glory. Despite the fact that due to an injury he was unable to complete a competitive Decathlon prior to the Games, an incredible first day saw him smash two lifetime bests in the Long Jump and 400m to lie in 2nd place overnight.

An eventful second day saw Dean finish a very credible 4th place, just 74 points off the eventual champion. With this outstanding performance followed up by a Bronze medal at the 2001 World Championships in Edmonton, Canada, Dean firmly established himself as a major force in International athletics and captured the hearts of the nation.

There followed 3 years of injury hell but much to the delight of the British public, Dean was able to gain a place at the 2004 Olympics in Athens where his unrivalled grit and determination once again culminated in a 4th place finish. After time out again in 2005 for injury, 2006 saw Dean return to action in quite spectacular style with a Gold medal win at the Commonwealth Games in Melbourne. Arguably the pinnacle of his career, Dean's body eventually gave in to the extreme rigours of the Decathlon and forced him into retirement in the Summer of 2008 having failed to qualify for his 3rd Olympics.

Dean's strong mental attitude and no quitting mentality truly endeared him to the athletic fraternity and general public at large and it is these character traits which have ensured that whilst one chapter of his life has ended, many more are still to be written.

In 2010 Dean put his cookery skills to the test on Celebrity Masterchef and tested his mental ability on Celebrity Mastermind. Dean joined the commentary boxes of both Radio 5 Live and Al Jazeera for The XIX Commonwealth Games in Delhi and The 16th Asian Games from Guangzhou in China respectively and has the opportunity to extend his time with 5 Live in 2011 and beyond.

A presenter, pundit and commentator Dean applies himself in the same meticulous fashion as he did when he competed, thus ensuring he still maintains a wide appeal to both brands and broadcasters.

Thank you so much for joining us at ACT, you were great fun to work with and we have had some fantastic feedback from both staff and delegates who enjoyed your company and of course competing against you!

Thank you so much for presenting at our annual Sports Awards Ceremony and making this important annual Corps sporting event a really special occasion.

Dean was the guest of honour at the Rochford District Sports Awards 2009 and I cannot speak highly enough of him and his professionalism. Dean was both inspirational and humorous in his account of the lead up to his success at the 2006 Commonwealth Games. He was a pleasure to work with both in the lead up to the event and on the night itself and was the last person to leave the venue at the end of the evening. For the sportspeople in the room to listen to a local athlete who has achieved so much turned a fantastic event into an amazing one.

I just wanted to pass on a sincere thank you for everything last night at the Wandsworth Sports Awards. The interview with Dean was definitely a higlight of the evening, especially with all the questions he answered for the aspiring athletes attending. He was really friendly, and ideal for our awards so thank you for arranging for him to be there and add to the awards success.

How to book Dean Macey for your event