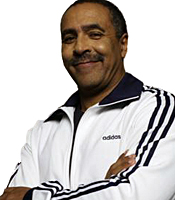 He was simply the world's greatest decathlete, drawing on a competitive attitude and ability that was unparalleled. Daley had an exuberant character on and off the track and such was his success and popularity made athletics front page news.

He retired from athletics in 1992 as a result of injury, and went on to play football for Wimbledon and Mansfield Town FC. He was awarded the MBE in 1982, an OBE in 1986 and advanced to CBE in 2000, and was voted BBC Sports Personality of the Year in 1982.

In January 2004 Daley Thompson set up Daley Fitness - a fitness training business based on helping people to take their fitness to new levels, whilst at the same time helping them to adopt a healthier lifestyle. Daley Fitness is open to individuals and corporate groups and involves daily training sessions in groups - these are devised and run by Daley.

Daley Thompson has seen his profile raised significantly both home and abroad following his invaluable, high profile involvement in the successful London 2012 bid for the Olympics.

Daley Thompson is also involved with two major charities, Laureus Sport for Good and Barnardos. He is an active supporter and works with both charities to promote their good work. He spends his leisure time being run around by his four children.

Clients often ask about purchasing books for giveaways and delegate packs. Below you’ll find a selection of products by Daley Thompson. Click the images to view on Amazon's website. For bulk orders, please speak with your Booking Agent.

How to book Daley Thompson for your event