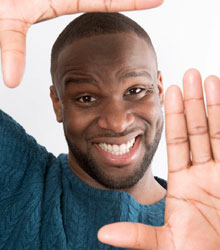 Over the past decade, Axel Blake has built his reputation, on and offline, as one of the UK’s leading comedy entertainers. His energetic, confident and animated persona captivates his audience whether he is delivering sharp observational stand-up comedy, presenting for the likes of Crep Protect, UNILAD or SBTV, hosting shows or creating his hilarious viral video sketches.

The comedian, presenter and content creator, has long established his position in the world of comedy, firstly as a rising star before solidifying his place as a champion comic and robust headliner.

He first performed on Mother’s Day in March 2009, having been inspired by Slim, Kojo and Richard Blackwood. These three comedians continue to offer Axel inspiration both as comedians and businessmen.

Whilst still a young talent, Axel’s truthful and observational style of stand-up comedy highlights his experience on the scene, the growth of this rounded entertainer has been sensational, with International credits, headline shows up and down the country as well as support slots alongside big names such as Eddie Griffin and Dave Chappelle.

In 2020, Blake recorded his live comedy special at the Indig02 in London. The show was called Axel Blake: I'm Not Gonna Lie, and is available on Amazon Prime Video.

Axel Blake, you killed it tonight.

How to book Axel Blake for your event