Free-climber, AKA the French Spider-Man 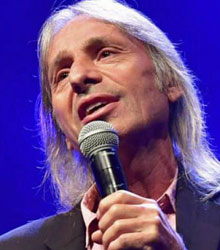 Alain Robert is famous in more than 100 countries for climbing 143 of the world's tallest buildings with his bare hands, and without ropes, safety gear or specialist equipment, except for a small bag of chalk and a pair of climbing shoes.

Known as "the French Spider-Man", the experienced rock climber and urban climber, from Digoin, Bourgogne, has climbed landmarks including the Eiffel Tower, the Sydney Opera House and the Montparnasse Tower as well as the world's tallest skyscrapers. In 1997 he climbed the Petronas Twin Towers in Kuala Lumpur, Malaysia but was arrested at the 60th floor, 28 floors below the top.

As authorities rarely give permission for such dangerous exploits, Alain Robert usually appears at dawn on the site of whichever giant skyscraper he has chosen to climb. His exploits attract crowds of many hundred onlookers who stop to watch him climb. As a consequence, he has been arrested many times, in various countries, by law enforcement officials waiting for him at the end of his climb.

Alain Robert's rock-climbing physical training and technique allow him to climb using the small protrusions of building walls and windows (such as window ledges and frames). Over the course of his climbing career, he has become so used to cramming his fingers into the cracks of ledges and hanging from balconies that he is actually unable to completely straighten his fingers. Many of his climbs provide him no opportunity to rest and can last several hours.

In March 2011, Alain Robert climbed the tallest building in the world, the 828-meter Burj Khalifa tower in Dubai, taking just over six hours to complete the climb. And on April 12th 2012, he set a Guinness World Record for climbing the 300m Aspire Tower in Doha, Qatar in the fastest time (1 hour, 33 minutes and 47 seconds).

Alain has given motivational talks and keynote speeches worldwide and has delivered these for some of the world's biggest corporations – including Bristol, Myers, Squibb, Citywire, National Bank of Abu Dhabi, HSBC, Russell Investments and to individuals including Sheikh Nayan, Tony Blair, Anthony Robins, Donald Trump and Bill Gates.

Prior to climbing any building with his bare hands, Alain Robert has always called his life into question and continued to take calculated risks. He is not afraid of failing; that’s how he always achieves his goals.

He prepares carefully for any ascent. He trains hard; his mind is totally concentrated on it. He knows that he’s got to get it right. Alain demonstrates the same focus and leadership while speaking at conventions and seminars around the world.

Few people are aware that following terrible injuries received in a fall in 1982, Alain Robert remains to this day 66% disabled. He also suffers from vertigo, epilepsy and, ironically, has a fear of heights.

Yet despite these ordinarily overwhelming challenges Alain has gone on to achieve worldwide celebrity status for his achievements. He is also acknowledged by climbers everywhere as ‘the greatest of all time’.

This charismatic and humorous Frenchman calls upon his amazing real life experiences to motivate a new generation of workers and leaders. His talks inspire us all, for no matter what the challenges we face, we can all ‘Reach way past our dreams’.

Clients often ask about purchasing books for giveaways and delegate packs. Below you’ll find a selection of products by Alain Robert. Click the images to view on Amazon's website. For bulk orders, please speak with your Booking Agent.

How to book Alain Robert for your event